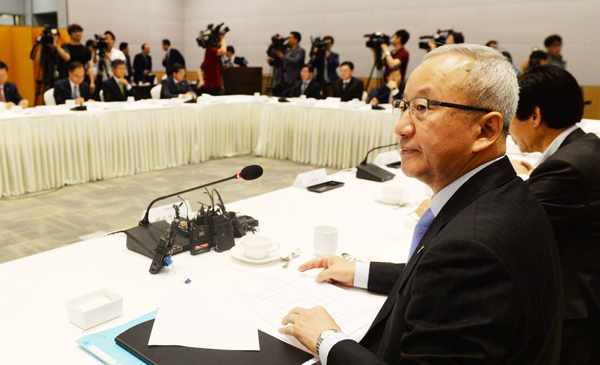 Hyun Oh-seok, deputy prime minister and finance minister, urged local conglomerates to resume any business activities that may have slowed after the Sewol ferry tragedy in April.

Many businesses have avoided high-profile activities, such as new marketing strategies or holding events, as an atmosphere of mourning pervaded the country. Some even put off investments.

Hyun’s comments came after the ferry tragedy was proven to have dented local consumption as people stayed home and avoided malls and amusement parks. The tragedy may have a direct impact on this year’s economic growth, which the government targeted at 4 percent.

Hyun met with CEOs and other top executives of the nation’s top 30 conglomerates at the headquarters of the Federation of Korean Industries, the nation’s largest business lobbying group, in Yeouido yesterday. He asked the businessmen to expedite investments and resume marketing and recruiting activities to revitalize domestic consumption.

“Korea’s economy was improving thanks to the impact of local policies and the world economy showing signs of recovering,” Hyun said. “But as the tragic sinking of Sewol ferry resulted in a weakening of the overall consumption sentiment and uncertainties about the world economy still exist, we need to keep closely monitoring the situation and to prepare response measures.”

Hyun requested the private sector to accelerate execution of this year’s business plans and take extra steps to boost consumer spending to perk up the sluggish domestic economy.

He said the dampening influence of the Sewol ferry disaster has eased up slightly as shown in the composite leading index (CLI), which predicts the state of the national economy six months ahead.

Hyun urged conglomerates to come up with additional investment plans.

According to a survey by the Federation of Korean Industries in March, the nation’s 600 large private companies planned to invest a total of 133 trillion won ($130.3 billion) this year, larger than last year’s 125.3 trillion won.

Hyun also said it was crucial for the private sector to encourage its employees to spend more money to revitalize depressed industries.

He urged companies to allow their employees to leave the office early - or at least not work overtime - to encourage consumption on the state-designated Culture Days, which are the final Wednesdays of each month. On those days, the Ministry of Culture, Sports and Tourism gives discounts on performances and exhibitions it holds.

As part of efforts to boost rural areas, the deputy prime minister requested companies to allow their employees to go on vacation both in the summer and throughout the year. He told them to encourage domestic tourism rather than trips overseas.

After the meeting, SK Group released a statement announcing that the conglomerate will spend about 10 billion won ($9.8 million) to help boost the domestic economy. The money will be spent on purchasing tour package gift certificates, which will help the economies of rural regions that were directly hit by canceled events or festivals after the ferry disaster. The conglomerate said it plans to encourage its employees to contribute to domestic tourism.