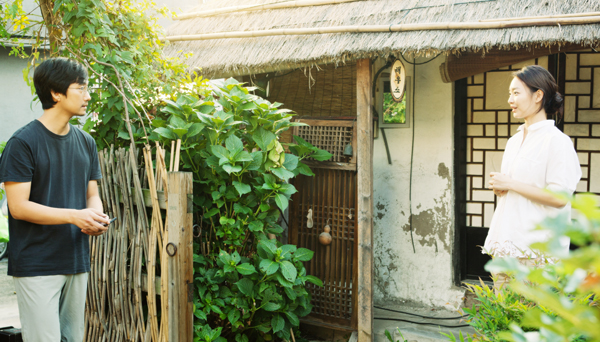 When Korean-Chinese filmmaker Zhang Lu visited Gyeongju for the first time in the mid-1990s, he was mesmerized by the unique landscape that marks the Silla-era capital.

“It was my first time in Korea, and in Gyeongju I saw how naturally the tombs and the lives of everyday people were intertwined,” said Zhang at a press conference on Monday.

Zhang’s latest film is full of uncomfortable silences and awkward moments between characters while a hint of death looms around every corner.

“It’s hard to get away from a tomb in Gyeongju,” says Shin Min-a’s character, Gong Yoon-hee, to the film’s lead, Choi Hyun (Park Hae-il), who she forms an undefinable and poignant relationship with.

The story begins with Choi, an ethnic Korean professor from Beijing University who visits Korea for the funeral of an old friend.

While in the country, he decides to take a trip to Gyeongju, to a traditional tea shop he visited with his deceased friend seven years ago.

While the journey begins with a search for a painting and the overall plot has a surreal vibe, the lead was at least based on a real person.

“The character is based on me foremost. I went to a funeral, went to the tea house and saw a chunhwa there,” said Zhang.

From left: Zhang Lu, Park Hae-il and Shin Min-a talk about their latest film at a press conference on Monday.

“But, of course, I didn’t call over my ex-girlfriend, nor did I meet Shin Min-a there,” joked Zhang.

Choi, like the filmmaker, is a professor, a Korean who speaks perfect Chinese, and a sort of alien in his native culture.

But although the character is based on Zhang, the film doesn’t have a definite sense of genre or storyline.

Zhang describes the movie’s meaning as “about what didn’t happen mixed in with what happened.”

And in usual Zhang style, the subtle screenplay was often too vague for even the actors to decipher.

“While working, I’d question, am I interpreting this right?” said Park.

In the end, Park worked out that the film was “about love, not just between a man and a woman, but between people.”

Shin professed, too, that like her co-star, she felt the film was a little abstract at times.

“When I first read the scenario, like Park, there were parts I didn’t really get ... I wasn’t sure if it was romance or about death.”

But still, the chance to work with Zhang was an opportunity she didn’t want to miss, even if it came with having to learn proper tea ceremony protocol or filming long shots, which actors usually find difficult.

“When you look at Zhang’s works, you feel something from the use of space, regardless of the dialogue or words,” said Shin.

Yoon Jin-seo who plays Choi’s former love, said that she had no trouble with the experience, having worked with Zhang before.

“In the scenario, there wasn’t much to go by, but I did think the director would have some deeper background knowledge about the characters,” said Yoon.

Although the narrative of Zhang’s latest film is more detailed than his previous documentary “Scenery,” it’s easy to see that Zhang was again moved by the same concept of dreams. In “Scenery,” he asked his interview subject what bizarre dreams they’d had while in Korea.

“The distinction between dream and reality … it was always something I wanted to portray, and this is the end result,” said Zhang.

“For the first time while shooting, I started thinking I wish this wouldn’t end.”

And for their part, Shin and Park said they’d be willing to act together on another project.

“If Park consents, I’d like to work with him again,” said Shin.

“How about ‘Jeonju’ for the next movie?” joked Park.