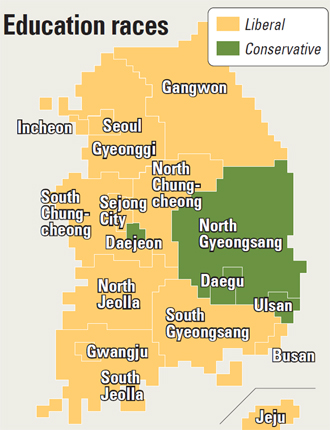 With the unprecedented victory of liberals in 13 of 17 elections for education superintendents Wednesday, political observers are waiting to see how they will change education policies and whether they will come into conflict with the conservative Park Geun-hye administration.

Except in four regions - Daegu, Daejeon, North Gyeongsang and Ulsan - 13 liberal candidates beat conservative rivals. In many of the races, several conservatives ran, while the liberals fielded only a single candidate in most of the 17 contests.

For instance, in Busan, there were six conservative rivals competing against a single liberal candidate, Kim Seok-joon, who won the highest proportion of the votes, 34.7 percent.

The liberal candidates also signed a joint pledge of common progressive reforms they desire to usher into Korea’s schools.

The pledges, aimed at easing competition among students and the need for private cram schools, include lowering the degree of difficulty of school textbooks, prohibiting students from getting to school before 8 a.m., considering the shutting of some expensive and prestigious private schools and forcing private cram schools to reduce classes on the weekends.

For instance, Seoul’s Cho Hi-yeon has publicly promised to launch an institute to “reform the education system in the capital areas” along with the winners in Gyeonggi, Lee Jae-jeong, and Incheon, Lee Cheong-yeon. The three liberal candidates jointly vowed to make textbooks simpler for elementary, middle and high schools in their regions.

The liberal education chiefs are also expected to push through their policies together.

In their joint pledge, they said they would strengthen the authority of “the association of the superintendents in metropolitan cities and provinces nationwide” so they can negotiate with the government about university admission policies. They also promised to launch a type of regular public hearing to discover the changes desired by people in current education policies.

The ambitious pledges of the liberal superintendents, however, are expected to conflict with the policies of the Ministry of Education under the Park administration.

As some regions have conservative mayors or provincial governors, the liberal superintendents are also expected to conflict with them, such as in Incheon, where Yoo Jeong-bok, a former public administration minister under the Park Geun-hye administration and a Saenuri Party candidate, won the mayoralty Wednesday.

According to the profiles of the 13 liberal victors, eight were teachers who were once fired from their schools because their lectures were considered too progressive or left-leaning by the Education Ministry or because they were members of the Korea Teachers and Education Workers Union, the country’s biggest association of liberal teachers.

The union, also called “jeongyojo” in Korean, was founded in 1987 with a name meaning “a committee of teachers nationwide for democratic education.” In 1989, the government designated the union an illegal group and fired a total of 1,527 teachers who were its members. In 1994, the Kim Young-sam administration restored them.

In 1999, the union was officially recognized by the government. Since then, it has protested a series of education policies by the government and called for abolishing the standardized admission test for universities. In 2013, the Labor Ministry again designated the union as being illegal, and the union called for suspension of the notice until a court could make a ruling.