No big loser or winner in elections

No big loser or winner in elections 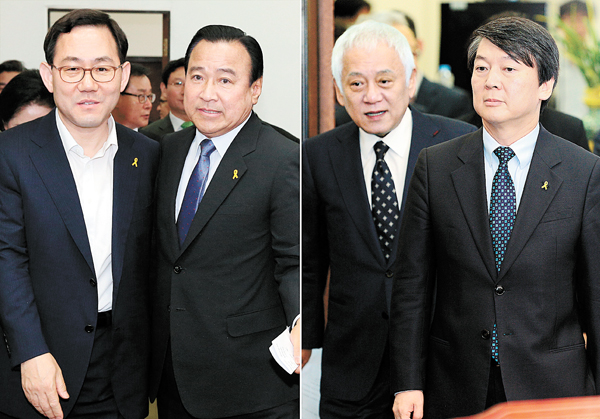 With a local election outcome that dictated no clear loser or winner, the ruling Saenuri Party yesterday was glad it didn’t do any worse. And the opposition New Politics Alliance for Democracy was sorry it didn’t do a little bit better.

The June 4 local elections, which were upended by the April 16 sinking of the ferry Sewol and the tsunami of public grief and anger against public corruption and callousness that followed, delivered nine victories for the NPAD in 17 key mayoral and gubernatorial races, and eight for the Saenuri Party.

The liberal opposition bragged of a slim victory, which actually fell short of its expectations of sweeping victories in Gyeonggi and Incheon, as well as taking power in the Saenuri strongholds of Busan and Daegu.

The results could be interpreted as voters choosing not to throw their full support behind either party and opting to balance the playing field. They were also seen as voters’ showing they hadn’t completely lost faith in the Park Geun-hye government’s promises of post-Sewol reforms to clean up the “scratch my back I’ll scratch yours” foundation of Korean politics and business.

That came as a relief to the ruling party, which had feared the worst-case scenario of losing all important key races except for the North and South Gyeongsang gubernatorial races. The Saenuri Party managed to wrest control of the Incheon mayor’s office from the opposition and maintain control of the Gyeonggi governorship and its longtime strongholds of Busan and Daegu.

“I really thank the people for giving us one more chance to proceed with measures for a full reform of the country,” said Lee Wan-koo, Saenuri’s floor leader, during a party leadership meeting yesterday at the National Assembly. 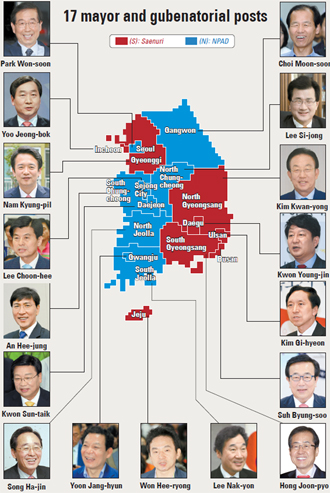 Lee also thanked the voters for their “balanced stance” in national affairs, adding that he had felt in earnest the gravity of public sentiment.

Saenuri’s biggest delights from the Wednesday election came in Incheon and Gyeonggi, both of which carry significant political weight because of their proximity to Seoul and their large populations.

Former Public Administration Minister Yoo Jeong-bok, a longtime aide to President Park, succeeded in ousting Incheon Mayor Song Young-gil of the NPAD by getting 49.95 percent of the vote compared to Song’s 48.2 percent. It was a stinging defeat to the opposition, which expected a comfortable win.

Former Saenuri lawmaker Nam Kyung-pil defeated his NPAD challenger Kim Jin-pyo by a razor-thin 0.87 percent margin, extending the Saenuri’s governance of Gyeonggi for a fourth consecutive term. The Saenuri’s worries about the Busan mayoral election were particularly high as independent candidate Oh Keo-don from the opposition bloc ran a neck-and-neck race with its candidate Suh Byung-soo. To its relief, Suh secured the country’s second-largest city by a margin of 1.3 percent with 50.65 percent to Oh’s 49.34 percent.

The conservative city of Daegu, a support base for the Saenuri for decades, confirmed its loyalty as Saenuri candidate Kwon Young-jin was elected with 55.95 percent of the votes compared to NPAD candidate Kim Boo-kyum’s 40.33 percent.

Kim also lost a bid to represent a Daegu district in the 2012 general election, but the fact that he got more than 40 percent of the vote was a surprise and a worry to the Saenuri Party in the future.

Kim could run in the 2016 general elections from Daegu in an adamant attempt to break the Saenuri’s choke hold on the city, a political path that was once tried by former President Roh Moo-hyun in Busan.

The ruling party lost gubernatorial races in both North and South Chungcheong and Gangwon to the NPAD. All three provinces are considered swing states in presidential elections as they are not as heavily influenced by regionalism as the Jeolla and Gyeongsang regions.

A popular saying in political circles is that a presidential candidate chosen by Chungcheong voters always wins the presidency.

During the last few days of the local election campaign, the Saenuri Party pleaded with voters to support it so that the president and her administration could successfully push forward with its promised reforms to clean up Korea.

The consensus is this strategy of so-called Park Geun-hye marketing worked well. 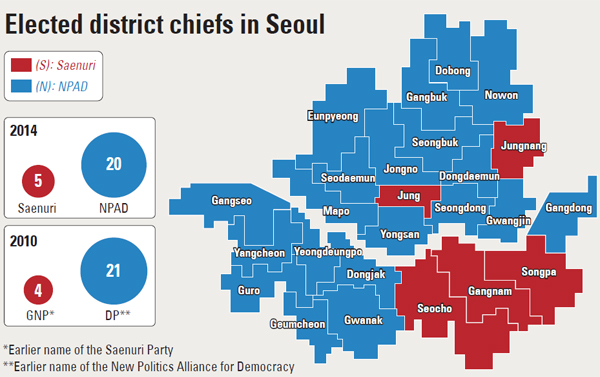 The importance of “Park Geun-hye marketing” was reflected in an acceptance speech by Incheon mayoral victor Yoo Jeong-bok in which he said, “I will bring about renovations in city governance and help the Park Geun-hye government to succeed.”

But it has also raised concerns of the party tying its future to Park, which could be a disaster if her popularity takes a downturn or after she enters the lame-duck period at the end of her term.

Some political observers said the NPAD failed to make the most out of the Sewol tragedy to attack the Saenuri. The opposition says there was a risk of politicizing a national tragedy.

“Our position has been steadfast that the Sewol issue should not be used for political gain,” said Representative Choi Won-sik of the NPAD, who was a co-head of the party’s campaign strategy team.

For the Blue House, which was under heavy criticism for its botched handling of the Sewol rescue, the election outcome is a mandate to push forward with reformist policies promised in the wake of the sinking.

“We humbly accept the judgment of the people in earnest and will strive to push forward with reform measures to make a new Korea,” said Blue House spokesman Min Kyung-wook during a press briefing yesterday.

Although the Saenuri failed to win a majority of the 17 key races, it won 117 races for city mayors, county and district chiefs among 226 positions. The opposition NPAD won 80 of those races while the remaining 29 were clinched by independents.

The minority Unified Progress Party, which awaits a Constitutional Court ruling on its own dismantlement for allegedly being pro-North Korea, failed to win a single of those 226 posts.

For 25 district-head races in Seoul, the NPAD won 20. The other five offices were won by Saenuri candidates.