Costs up after ban reduced

Costs up after ban reduced 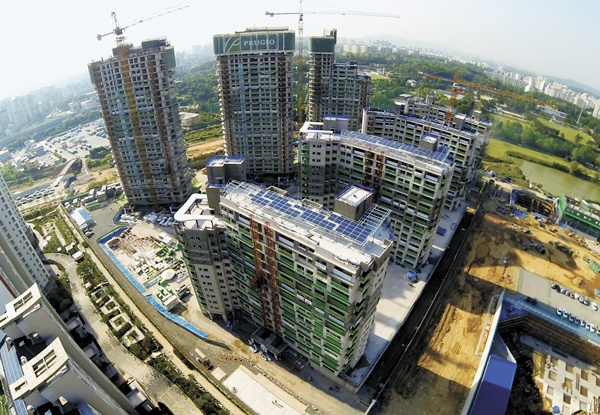 Since late last month, Mr. Kim’s phone has been ringing off the hook. Kim, a realtor in Pangyo, Gyeonggi, usually receives inquiries into sales of units at the apartment building Alpharium, which has commercial stores and restaurants on the lower floors and residential units on the upper floors.

The building is still under construction, but starting November 2015, residents will likely start moving in.

“Those who are planning to move to the area from neighboring Bundang or those who failed to win the lottery to purchase new apartments that haven’t been built yet have shown interest,” Kim said. “Some of the purchasing rights on the apartments have even gone up to 200 million won [$196,000].”

Later this month, owners of units at the Alpharium will be allowed to resell their apartment purchasing rights, which they were banned from doing for a year.

By law, any new apartment building in the greater Seoul area built by a private company on private property is banned from being resold within a certain time period. The regulation was implemented in order to prevent speculation that could drive up prices.

But recently, potential home buyers, most of whom are living on jeonse contracts, have been considering buying apartments in new buildings after the government in February reduced the one-year ban on resales to six months. The shorter term goes into effect in July.

As a result, the market for the purchasing rights of apartments that are still being built has gone up, with some of the apartments adding a premium to the transaction price. 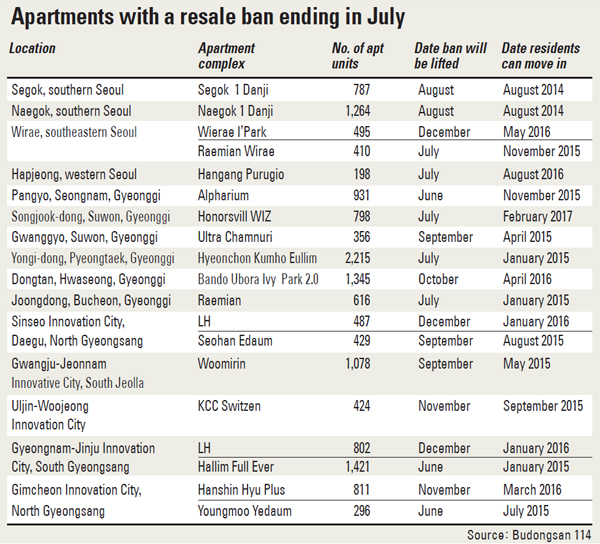 According to the Ministry of Land, Infrastructure and Transport, 75,550 apartment purchasing rights were bought in the first quarter. This is the largest transaction since the first quarter of 2006 when the rights for 72,296 units were bought. The government has publicly disclosed quarterly apartment purchasing rights transactions on new buildings since 2006.

The market is expected to further heat up in the second half of the year when the resale term is reduced on popular apartments such as the Wirae.

According to Budongsan 114, a real estate information provider, in the second half, more than 87,900 units across the country will no longer be bound by the one-year resale ban.

This includes 42,600 apartment units in the greater Seoul area and 45,200 apartments in other major cities such as Sejong, Daegu and Gwangju built on public land whose sales ban will reach the one-year mark in the second half.

There are no sales bans on apartments being built on private property outside of the greater Seoul area. There is a one-year ban for those built on government-provided property.