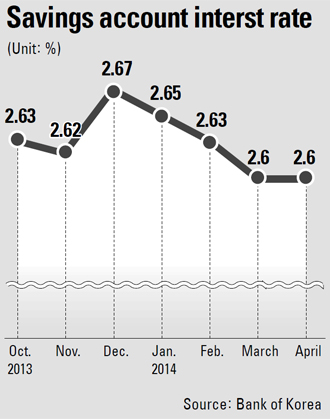 Interest on savings accounts in March and April has hit the lowest mark since the central bank began compiling data in 1996.

According to the Bank of Korea, the savings account interest rate was at 2.6 percent in March and April, down from 2.63 percent in February.

The savings interest rate has been steadily falling since it dropped below 3 percent for the first time in February 2013, as the central bank has maintained its loose monetary policy. The key interest rate has stayed at 2.5 percent since it was last changed in May 2013.

In an earlier report, the central bank said time deposits as of the end of March were estimated at 573.4 trillion won ($561.7 billion). Total time deposits have been slipping since reaching a peak of 591.1 trillion won in August 2012.

But some market analysts say the figure presented by the central bank includes deposits made by corporations and therefore declining of deposits by individuals would be more acute.

Considering that the central bank has predicted that inflation will reach 2.1 percent by year’s end, a subscriber to a savings account will actually be losing money on interest rather than gaining profit.

And considering the tax rate on interest, which is 15.6 percent, subscribing to a deposit has no real appeal as an investment.

As an alternative, money market accounts are becoming more popular, although they have an interest rate not much higher than that of a savings account, at 2.5 percent. Some of the products give an annual interest return of 3 percent, although there are conditions.

JB Bank is offering a money market deposit that guarantees a 2.5 percent interest rate when subscribed to online. There are no strings attached, such as a minimum initial deposit amount or age limit. The only inconvenience is that the account must be canceled in person at one of the bank’s branches and cannot be canceled online.

Korea Development Bank has a similar account with no conditions for subscribing. Anyone can open an account online, but the interest rate guaranteed is 2.25 percent.

Citibank Korea has a money market account with 2.2 percent interest when the amount of money in it is in between 10 million won and 30 million won. The rate increases when more money is put into the account.

A 2.5 percent rate is given to those who have more than 50 million won in the account, but if the amount is less than 5 million won, the interest is 0.1 percent. The product, launched at the end of March, has attracted more than 1 trillion won in just two months.

The Korea Exchange Bank has an account for those with a low income, with a 2.5 percent interest on amounts less than 1 million won.

But if the account exceeds 1 million won, it offers 1 percent interest on amounts up to 2 million won.