Ace Golf, the nation’s largest golf club private membership trading company, recently abandoned its membership exchange business after the price of memberships and the trading volume drastically plunged in the wake of the 2008 global financial crisis.

The company, which held about 30 percent of the local membership exchange market, announced it will shift its business focus to golf club management and developing new courses. Its private membership trading business was acquired by the company’s employees in line with an employee stock ownership plan.

According to the industry, prices of private golf club memberships in Korea have dropped 75 percent from early 2008. Even at the cheaper price, not many customers are interested in purchasing a membership.

Now there are only about 150 centers nationwide compared to 250 in 2008. Most of the businesses are small, operated by one or two people, and some of them have changed from membership trading to golf course booking agencies.

“In Japan, golf course membership trading centers, of which there were previously about 2,400, have mostly closed down,” said Jim Hwang, president and CEO of IMG Golf Course Management Korea, who manages golf courses in Japan and the United States. “The Korean golf industry is facing similar circumstances.”

Because of the changes, Japanese golfers buy memberships directly from golf courses without going through a trading center.

Until the 1980s, there were less than 50 golf courses in Korea, and private memberships were kept among a small number of wealthy people.

The numbers of golf courses skyrocketed in the early 1990s, after the Roh Tae-woo administration gave the authority to construct golf courses to local governments instead of keeping it within the Blue House. The nation’s first membership trading center opened in 1991 and was modeled after Japanese agencies.

In the early 2000s, the Kim Dae-jung administration allowed mass construction of golf courses as part of its deregulation efforts, and the policy led to the creation of super high-end golf courses with membership fees of more than 500 million won. 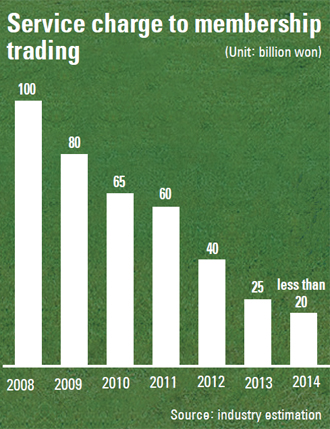 With their gaining popularity and high prices, the memberships became a speculative investment similar to real estate. People who didn’t even golf bought memberships.

Membership trading companies made big bucks with agencies preselling memberships for golf courses that were under construction. The companies also profited from margins when people only owned a membership for a short period of time and then sold it back.

There was a saying that the golf membership dealers could buy an apartment after just a year or two of work. They expanded their market overseas by selling memberships to Koreans who wanted to play abroad.

Ace Golf created a membership price index modeled after the Kospi and with its strong business based in membership trading, Ace purchased shares in the nation’s best-selling golf course, Sky 72, becoming its largest shareholder.

“Back in the old days when private memberships were strong in the market, some trading centers manipulated the prices and worked as the superior player in the club,” said a golf industry insider.

The memberships amount to a discount voucher to use the sports facilities. They are not substantial and don’t include shares, unlike real estate or stocks.

With an oversupply of golf clubs and the economic downturn, golf-related businesses stumbled, starting with Jeju. As the price of memberships became cheaper than the initiation fee that was being charged by the club, members started requesting refunds but many clubs ran short of cash after putting the money into construction.

Private golf clubs have to pay individual consumption taxes of about 21,120 won per customer, and must give members discounts on club utility fees, also called green fees. They also have to pay a comprehensive real estate holding tax, about four to five times more than public clubs. The tax encouraged about 10 local private golf clubs to go public in 2013.

There are only two new private golf clubs opening this year. Last year, there were 231 public golf clubs nationwide, and 230 private. It was the first time that the number of public clubs surpassed private.

“Traders should arrange sales with a new paradigm that memberships are just a voucher to use golf club facilities, not an investment,” said Koo Jin-seo, CEO of JoongAng Membership Exchange.