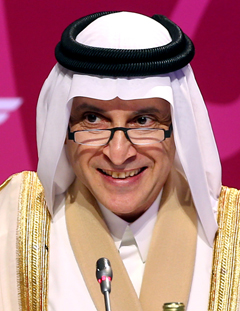 “We want to expand to Korea,” Al Baker told the Korea JoongAng Daily at the IATA AGM. “But Korean authorities are protectionists, so every time we apply for additional facilities and flights, we’re not given them.”

Currently, Qatar Airways has a daily flight to Korea, just like its rivals Etihad Airways (based in Abu Dhabi) and Emirates (based in Dubai).

Al Baker, who is also a board member of Heathrow Airport Holdings in London, said that Hamad International Airport will be a better hub for tourists than rival airports as they can transfer easily to Europe or Africa.

“Competition is always good for everybody, and we’re ready for this competition,” he said. “Dubai is ahead of us, but as far as growth percentage is concerned, we are the same as them.”

The new airport, which opened on May 27, has a capacity of 30 million passengers a year, and is under construction to increase capacity to more than 50 million after 2015.

The airport also runs a hotel with 200 rooms and has sporting facilities including a swimming pool. It also has more than 70 retail outlets selling designer labels.

With the opening of the new airport, industry insiders expect competition among the three Gulf carriers to get tougher. They already have been competing in Korea through promotions and marketing. 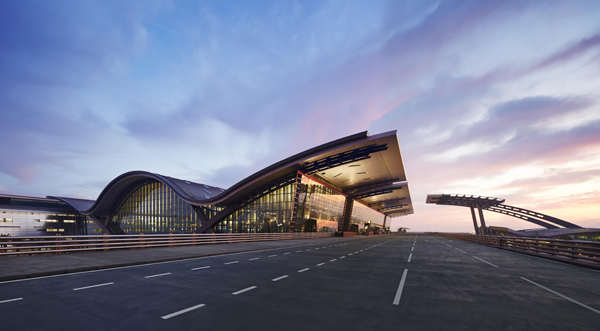 “These carriers, including Qatar Airways, have been at the core of a major shift in global aviation,” Tony Tyler, IATA director general and CEO, said in a statement. “In just over a decade, the share of global traffic accounted for by Middle East airlines increased from 4 percent to 9 percent and much of this growth has been realized here in the Gulf.”

Industry insiders said that expansion of Gulf-region air carriers is evident even in Korea as they are financially powerful and can use their luxury facilities to attract customers.

“These Middle East air carriers have less burdens in cost management compared to others since aircraft financing and fuel costs aren’t much of a problem to them,” said an official from a major Korean airline who asked not to be named. “These countries also have lot of construction going on, so if their national carriers want to expand routes in exchange for construction contracts, what can our government do?”

Korean air carriers are becoming better partners with the Gulf carriers by forming alliances. Qatar Airways is code-sharing with Asiana Airlines, while Emirates code-shares with Korean Air Lines. Etihad is a partner of both Asiana and KAL.

But an official from KAL said that the company isn’t considering changing its Middle East hub from Dubai to Doha, though it is open to increasing flights depending on the growth of Hamad International Airport.

IATA CEO Tyler said that Qatar is “using aviation-enabled connectivity as a cornerstone of its economic and social development.”