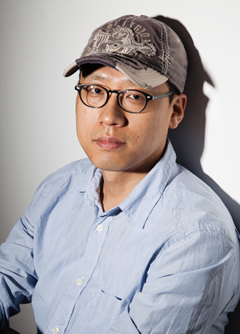 “A Hard Day,” which was released on May 29, is 43-year-old director Kim Seong-hun’s first work in eight years.

His debut movie “How the Lack of Love Affects Two Men” (2006) was mostly ignored by critics and the public. Thinking that “A Hard Day” could possibly be his last film, Kim labored over the screenplay for six years.

“A Hard Day” is an action-packed movie that puts protagonist Go Geon-soo (Lee Sun-kyun) in a tricky situation from the very first scene, and a fast and detailed plot unravels.

The JoongAng Ilbo interviewed Kim last month before the opening ceremony for the Cannes International Film Festival’s Directors’ Fortnight, which “A Hard Day” was chosen for.

Q. Why did you write the screenplay on your own?

A. Nobody gave me a screenplay, so I wrote my own. I’m kidding [laughs]. “How the Lack” got poor reviews. Thinking this could be my last work, I decided to make a film I wanted to do the most. While I was contemplating how to build tension in the movie, I came across Director Pedro Almodovar’s “Volver” (2006). There’s a scene when the main character, Raimunda (Penelope Cruz), hides her dead husband’s body in a restaurant refrigerator. I didn’t think that was the perfect place to hide a dead body. How about hiding it in someone else’s grave, someone who will keep the secret sealed forever for you, like your mother? Why not a mother’s grave? That idea got me started to write a screenplay full of thrill and tension. That was back in 2008. The screenplay’s first draft appeared at the beginning of 2009, and it has been edited since last August.

How did you create tension in the movie?

There needs to be an explanation before throwing the protagonist into a certain situation. If an explanation is weak, then the movie loses its credibility in a snap. My rule when writing the screenplay was to make every scene believable to the audience and to make it fun at the same time. Putting a sign in every scene and linking it to the following story was a painful but fun procedure.

How do the first and second acts differ in the movie?

The first half shows Geon-soo being caught in a sticky situation, while the second act is Chang-min, who created that situation, pushing Geon-soo into a different crisis.

What kind of character is Chang-min?

I wanted to create a realistic character while maintaining cinematic amusement. This part heavily relied on the actor’s acting skills as well. Chang-min is a bad guy, but he is also the hardest-working character in the movie. From Chang-min’s perspective, he’s been living his life making money in his own way until an obstacle called Geon-soo comes up.

What is the difference between Chang-min and his antagonists, Geon-soo and his co-workers? They don’t seem so innocent, either.

Moral characters are boring. Geon-soo and his co-workers are immoral police detectives, but it should be brought into question whether they are on the same level of evil as Chang-min. They say the pot calls the kettle black, but I think there’s a big difference between the pot and the kettle. Even if it’s the same act of urinating in the street, Chang-min would urinate openly onto a big road, while Geon-soo would urinate secretly in a dark street. I assume there’s a big difference between the two.

Was there a reason for adding humor to the film? Even when tension is high, there’s room for laughter.

No matter what movie I film, I want to add humor to it. Isn’t that how our lives are? We don’t just laugh when watching Gag Concert [a comedy TV show in Korea]. I think laughter is necessary in all circumstances. There’s laughter in daily conversations, and people laugh even when they are nervous.

Movies are the same. No matter how full of tension a thriller is, if humor is put in the right place, the audience can feel closer to the protagonist. I struggled to find the fine line of adding realistic humor without detracting from the tension.

Are you considered funny in general?

When I tell a joke, they say I should write and film a movie instead of telling it. The screenplay’s funny, but the person isn’t [laughs].

The title “A Hard Day” seems to carry significance after watching the movie. What does it mean?

It means it’s hard to stop something once it happens and starts rolling. The movie starts with Geon-soo trying to hide a corpse after a car accident. The incident gets bigger and bigger until it reaches the conclusion. The movie ends there, but Geon-soo’s story doesn’t. The incident can get bigger depending on Geon-soo’s choices.

How does it feel to have finished your second movie in eight years?

When I look back at my first film, I flattered myself thinking I tried my best even when I didn’t. At the filming site and by the latter half of the film, I frequently said, “This is good enough. This won’t affect the film much.”

I was arrogant, and I’m still embarrassed in front of those who worked with me in making “How the Lack” I promised myself that I would never say that while filming “A Hard Day.” I thought I should at least try my best so that I wouldn’t be as embarrassed when making the next film.

You were invited to Directors’ Fortnight at Cannes International Film Festival. How are the reviews for your film going so far?

An article I read said the festival thought the film was “very precise, refreshing and stimulates the new senses.”

I think that’s an accurate description. I learned French as my second foreign language in high school and now is my chance to finally put it to use [laughs].