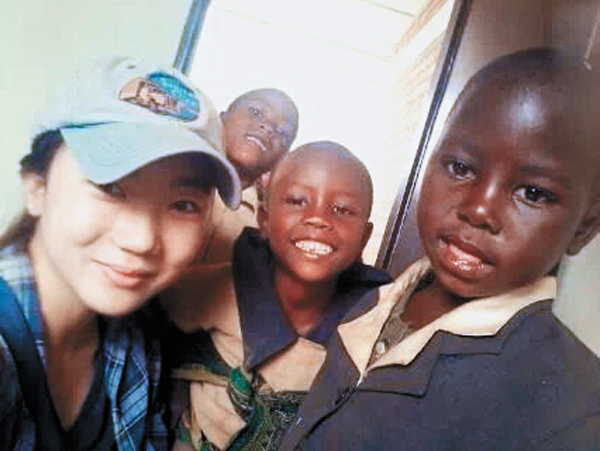 Chae Ji-hye with children of the kindergarten she built in the village of Raro in Rwanda. Provided by Chae Ji-hye

For 26-year-old Daegu kindergarten teacher Chae Ji-hye, the world is her classroom. On June 21, she will leave for a village in Sri Lanka for an extended period of volunteer work, her second stint helping others after one in the African country of Rwanda.

To prepare, Chae has been camping with other resident volunteers and discussing her plans with them at Kyungwoon University Saemaul Academy in Gumi. They are all members of the Saemaul Overseas Volunteer Program, a North Gyeongsang organization that sent 100 members to eight countries in 2014.

She is the only woman to volunteer for two 14-month projects. Why? “I couldn’t forget the shiny, limpid eyes of the Rwandan children who tagged along with me when I left,” Chae says.

She arrived in the Rwandan village of Raro in August 2012. Children in the village had to walk 1.5 kilometers (nearly a mile) for water. Using her experience as a teacher, Chae established a kindergarten and built a parents association, planning classes in the local language.

At first, there was little participation in parent-teacher meetings, but parents’ attitudes began to change when their children got interested in school and started to have fun with the class material.

Each family contributed 100 Rwandan Francs (15 cents) to buy a tent with a wooden floor where children could eat their snacks. It was a huge change.

“In only a year, a decent kindergarten was built,” Chae says with a pride. She and her fellow volunteers also succeeded in getting electricity and a water pump in the village through Saemaul Undong, a movement to improve the community.

She usually ate potato fries, a local staple. The most bothersome were the fleas. Chae says she could barely sleep after spraying flea powder all over the house.

Luckily, the village had Wi-Fi thanks to the small Global Village nearby, so she had access to the Internet and smartphone service. She frequently met people from the UN Refugee Agency, a German electricity company and volunteers from Japan.

Chae says she has dreamt of helping children living in poverty-stricken areas overseas and supporting South American children since she was a student in Keimyung College University. Her dream came true in Rwanda, and now she is extending it to Sri Lanka.

She adds that her parents understand and support her, saying they are also interested in helping the needy children of the world.