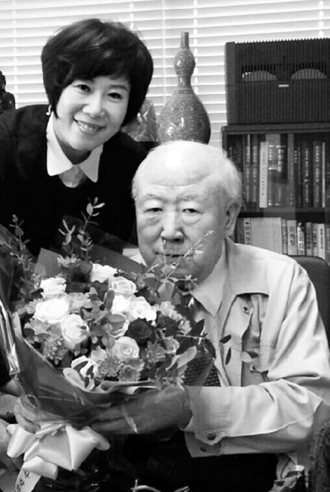 Kim Hae-ryun took a photo with her father Kim Young-hwan to celebrate Parents’ Day last year. It was the last Parents’ Day they celebrated together. Provided by the company

It wasn’t too long ago that the dream of many Koreans was to be able to study without worrying about costs. Today, it remains an ambition beyond the means of some families.

Yet one man, who was determined to get an education and became a success in business, established a scholarship fund to help a few families realize their dreams. That is one part of the life story of Kim Young-hwan, the late chairman of Songwon Group, who died of liver cancer in March.

His daughter, Kim Hae-ryun, the new chairman of the group, published a book titled “The Happiest Man in the World” to celebrate her father’s life and achievements.

The late chairman was a blunt man from Gyeongsang, where fammilies traditionally had a strong preference for sons over daughters. But he was a loving father to his only child, telling people around him he was more than happy having a daughter instead of a son.

Kim was born in 1934 in Gimhae, South Gyeongsang, the second of nine children.

He became the main hope of his family after the death of his older brother.

After graduating from Gyeongnam Commercial High School (now Bukyeong High School) in Busan, he worked in factories to pay for tuition during his undergraduate years at Seoul National University’s School of Commerce.

Kim joined a cousin’s company after graduating and finally managed to start his own business at the age of 40 by acquiring Korea Electric Chemical in 1974.

In 1977, when the company started making profits, Kim began to provide tuitions and expenses for its employees’ children.

In 1983, he established a scholarship foundation for needy students who were recommended by schools. He donated 100 million won ($97,742) for the foundation.

In 2002, the National Tax Service did an audit of his group and Kim was recognized for his transparent management and accounting.

Since then, Songwon was given a commendation by the National Tax Service chief in 2004 for transparency and another from the Ministry of Strategy and Finance in 2005.

“Father always said that scholarships given to students should be money that was earned in transparent and ethical ways,” says Kim.

A total of 6 billion won has been given in scholarships to about 570 students over the past three decades.

“If he was one of those typical fathers, I wouldn’t have been courageous enough to write a book about him,” Kim Hae-ryun says. “He was a man of his own firm values. He was someone who acted first, before talking about things.”

She says the scholarship foundation was her father’s ultimate purpose in life and one of the reasons he kept Songwon Group going.

“I will have to continue his legacy,” she says, “by managing the company transparently.”

Songwon Group has grown into a midsize producer of steel scouring chemicals and industrial gas with nine affiliates and sales of about 540 billion won last year.

Kim took over as chairman of the group Tuesday and pledged to boost the group’s annual sales to 1 trillion won by 2020.

“Because I have my father’s DNA, I will trust my intuition when making business decisions, reminding myself to make the same kind of decisions my father would have made,” she says.