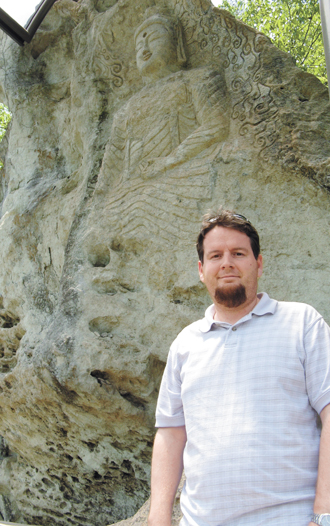 Dale Quarrington, a 36-year-old Canadian teacher of English in Korea, also contributes to spreading the beauty and knowledge of Korean Buddhism through his blog titled, “Dale’s Korean Temple Adventures.”

Since January 2011, Quarrington has visited more than 190 temples in Korea and posted pictures and reviews. That breaks down to three or four temples every month.

Quarrington was born and grew up in Canada and became interested in Buddhism when he was in high school.

“I have been interested in religion since I was young,” he says. “The first temple I encountered was a Korean temple in Toronto.”

He says that in the eyes of a foreigner, magnanimity is the most intriguing part of Korean Buddhism.

“Korean Buddhism is distinct from Northeastern Buddhism because it embraces not only Buddhism, but shaman faith, Taoism and Confucianism, all together.”

Quarrington has taught English at an elementary school in Yangsan, South Gyeongsang, since 2011 after he graduated from York University in Toronto.

When he settled in Korea, he began exploring temples in Gyeongsang.

“I started my visits because there were not enough English guides with information on Korean temples,” he says.

In his blog, he scores each temple on a scales of one to 10 based on historic and architectural value and accessibility. Seven have received a perfect 10, including Tongdo Temple in Yansan, South Gyeongsang, Bulguk Temple in Gyeongju, North Gyeongsang, and Hwaeom Temple in Gurye, South Jeolla.

Quarrington’s favorite is Tongdo Temple, a 20-minute drive from his home.

“Tongdo Temple has so many things to enjoy,” he says. “It is the place where Buddha’s Jinsin sari is enshrined.” Sari, considered a relic of Buddha, is a small stone ball that looks like a pearl, sometimes found along with the cremated remains of monks.

Many foreign monks study at Tongdo Temple, and Quarrington visits frequently to learn about Buddhism by conversing with them.

Quarrington also has considerable knowledge of Buddhist art, from altar portraits to statues of Buddha. He explains the Sermon on Vulture Peak painting, or Yeongsan Hoesang-do, using an example of the picture in Daeungjeon Hall at Naeso Temple.

“Yeongsan Hoesang-do is a picture of Buddha teaching Buddhism surrounded by Bodhisattva statues, which are enlightened beings,” he says.

He also is fluent in the technical terms of temples, such as Budo, which is a stupa that contains the remains or a monk.

Quarrington soon will publish a book titled “Korean Temples of Gyeongsang” based on his experiences.

“Studying is always easier if you are passionate about the subject,” he says. “My passion is for Korean Buddhism and temples.”

Though he regularly visits Korean temples, Quarrington is not Buddhist. Even so, he puts the palms of his hands together flat in a sign of prayer when he enters a temple to show respect.

“I realized from my travels that religion is something we can truly look to with respect,” he says. “Every religion has the goal of making the world a better place.”