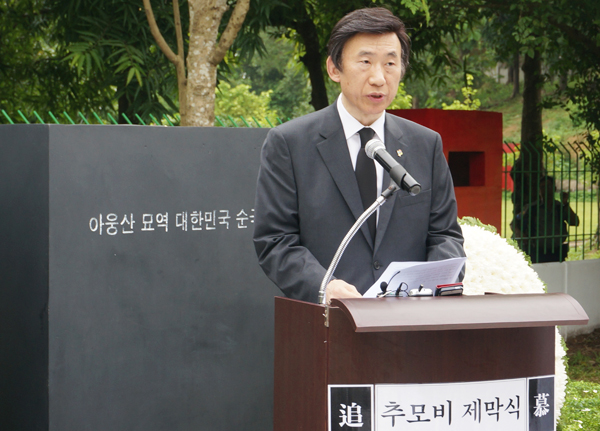 Foreign Affairs Minister Yun Byung-se speaks yesterday at the unveiling ceremony for a memorial to the 17 Koreans killed in North Korea’s terror attack at the Martyrs’ Mausoleum in Yangon, Myanmar. [NEWS1]

Foreign Affairs Minister Yun Byung-se attended a ceremony at the Martyrs’ Mausoleum in Yangon yesterday for the unveiling of a memorial to 17 Koreans who were killed in an attack by North Korea in Myanmar 31 years ago.

In attendance were 23 relatives of the victims.

The commandos set up two bombs on the roof and the explosion ripped through the crowd below, killing 21 people.

Chun was delayed in traffic and was not at the mausoleum when the bombs detonated.

“The attack was an act of brutality that clearly showed the bellicosity and cruelty of North Korea,” said Yun. “It was also an event that reminded us of the tragic reality of division of the Korean Peninsula.”

After the attack, Myanmar and three other countries severed diplomatic relations with North Korea, and 69 countries including the United States and Japan denounced the act.

The nine-meter-wide (29.5-foot-wide) monument with the names of those killed was set up near the northern gate of the mausoleum, only 100 meters from the scene of the attack.

“When I came here with my son 20 years ago, it was just a desolate place with nothing,” said Lee Sun-ja, wife of Kim Jae-ik, senior presidential secretary for the economy, who was among the dead. “I feel very grateful that the monument was established near [the scene].”

“I had never been to the scene of the terror attack,” said Kim Tae-gyun, son of Kim Yong-han, who was the vice minister of science and technology. “I have felt guilty for the deceased. Now that we held the unveiling ceremony [of the monument], I hope later generations won’t forget about this historic event.”

“The cenotaph for the 17 people at a riverside of Imjin River reads ‘Overcome grudges and let’s live together in the same nation, same fence and same bosom,’” Yun said after laying a flower at the monument. “Overcoming the pain of being divided into two different countries and becoming one is what the deceased would have wanted, and they would agree that it is what we should do now.”