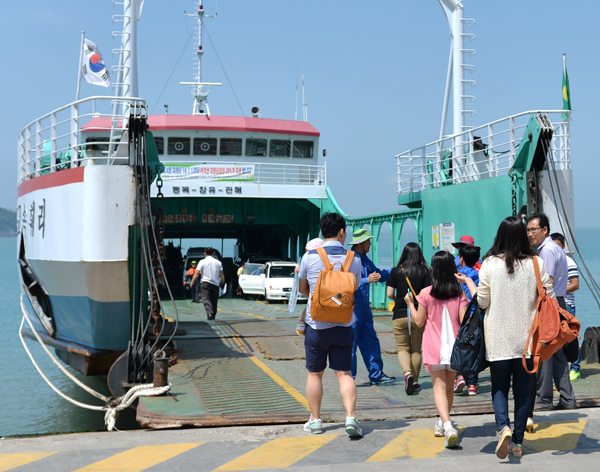 Passengers get on a ferry at Paengmok Harbor in Jindo, South Jeolla, to travel to nearby islands yesterday, 51 days after the Sewol went down with more than 300 crew members and passengers onboard. [NEWS1]

Divers searching yesterday for the remains of crew and passengers in the hull of the Sewol ferry recovered the body of a 60-year-old crew member, who was identified only by his surname Kim, the emergency countermeasure headquarters said yesterday.

The body was found in a cabin near the stern 51 days after the ferry capsized on April 16 in waters off Jindo, South Jeolla, causing the death of more than 300 people.

Kim is believed to have worked in the ferry’s kitchen, and was reportedly last seen injured after falling on the third floor of the ship.

The headquarters added that Kim was not wearing a life jacket when his body was found.

Yesterday’s discovery came a day after the corpse of a 43-year-old passenger was discovered floating about 40 kilometers, or 24.8 miles, away from the accident scene.

According to the emergency countermeasures headquarters, a fishing boat came across the body of a passenger, identified only by his surname, Jo, who is assumed to be the father of a 7-year-old survivor. His 11-year-old son and 45-year-old wife had already been found dead. Jo was on his way to Jeju Island on a trip with his family.

The body was the first to be recovered from the sunken ferry in 16 days. Divers on the search mission have failed to find the remains of any victims since May 20, as they have not been able to enter parts of the ship due to obstacles and the risk of the ship infrastructure’s collapse.

A joint rescue team of civil, governmental and military personnel is still working on cutting the windows out of the ferry’s hull while also combing other parts of the ship for bodies.

But the search recently cost the life of a second diver: a private contractor at the scene who was pulled to the surface after an exploding sound was heard May 30. He was taken to a hospital in Mokpo, South Jeolla, but was pronounced dead later that day. The hospital director said the diver seemed to have died from lung damage from large external pressure, but the exact cause of death is still unknown.

Meanwhile, critics are raising concerns about the loss of victims’ bodies, pointing out that the authorities’ search procedures had been limited as they allowed a body to sweep as far away as 40 kilometers.

Officials have now set up fishing nets around the accident scene and are dispatching more than 100 Coast Guard and fishing vessels every day to search for bodies from the ferry within a radius of 80 kilometers.

Including the two bodies recovered between Thursday and yesterday, the death count totals 290, while the number of missing passengers is down to 14.