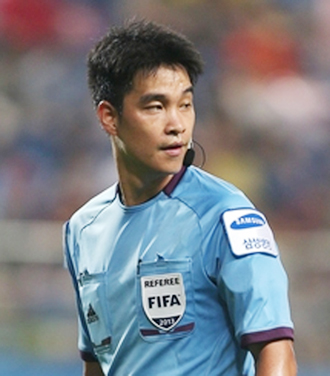 K-League Classic referee Kim Jong-hyuk, 31, was a promising football prospect until his high school years. He played with former Korean national team goalkeeper Kim Young-gwang at Suncheon Jungang Elementary School, Gwangyang Middle School and Gwangyang High School. But he was forced to hang up his football boots for good after a knee injury and the resulting surgery when he was a junior in high school.

Ki Young-ok, father of Swansea City midfielder Ki Sung-yeung, who was the manager of the high school team at that time, recommended that Kim become a professional referee, but he initially resisted.

“I really didn’t like that advice because I knew that most people in the country don’t consider refereeing a good occupation,” Kim recalled. “But the manager [Ki] didn’t give up on me and I eventually followed his advice. I acquired an international referee license in 2009 and became a referee for the K-League in 2011.

“I tried hard and people soon acknowledged my hard effort to become a decent referee on the field. I never skipped training when I was a player and I think Ki thought my character was suitable for the job. I really do appreciate his advice now.”

“Only 1 percent of amateur football players become professional. The other 99 percent should prepare and think about what they really need to do for the future,” said Choi Soon-ho, vice chairman of the Korea Football Association at a forum held at Seoul’s Grand Hilton Hotel in Hongeun-dong in May. The forum was organized by the association just before the World Cup as part of its efforts to inform players that there are many football-related job opportunities for young prospects especially who are struggling on the field.

“When a coach tells a player’s parent that their son isn’t as talented as they think, most of the parents do not accept that opinion,” Ki said. “Becoming a different person isn’t bad for young people because not everyone can succeed in football where there is always a high level of competition. I recommended that Kim become a referee and he became one of the most respected by players in the league.”

Kim said refereeing is a lonely job. Most players in the league are his friends or former teammates, but he doesn’t meet them privately because he doesn’t want people to misunderstand his relationship with the players. The fear of making a wrong call is also a huge stress for him.

“Because I’m also only a human, I sometime make wrong calls,” Kim said. “I’m not able to fall asleep on such days.”

He said the worst mistake he made was in the Korea FA Cup final between Seongnam FC and Suwon Samsung Bluewings in 2011. The Bluewings scored a goal, but an assistant referee called it offside. Kim agreed with the call, but instant replay showed that the call was wrong. The Bluewings lost and Kim took the blame from fans, even though he admitted to the wrong call on his Twitter account.

“Referees generally follow the assistant’s call in an offside situation,” he said. “But since the final call is made by the main referee, like myself, I thought I was accountable for that call. I still feel sorry about it, but I also was able to learn a lot from the experience.”

Kim said his dream is to become a World Cup referee.

“My friend Young-gwang was a member of the 2010 South Africa World Cup squad,” Kim said. “Just like he realized his dream [of playing in the World Cup], I one day dream of refereeing a World Cup match. When I had to quit football, I locked myself in my house because I thought my life was over, but there were so many things that I could do. The only problem was that I didn’t know it.”

I really want to tell young players who are in a similar situation as I was to encourage themselves. We were all once players enduring tough training. It means that we have the energy to overcome any difficulty.”