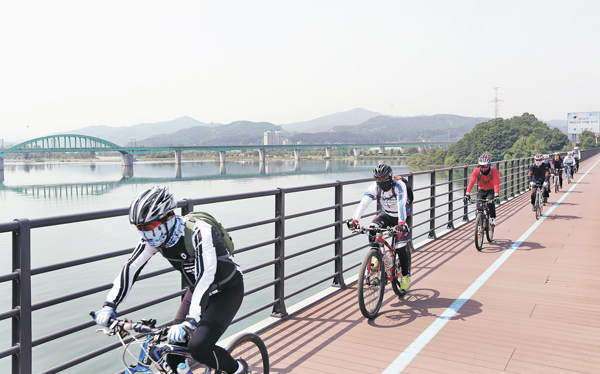 Riders on a newly remodeled cycling road along the Bukhan River in Gapyeong, Gyeonggi. By Jeon Ick-jin

A redeveloped 25.6-kilometer (15.9-mile) road along the Bukhan River in Gapyeong, Gyeonggi, has become one of the most popular national bike paths for cyclists since it opened in December 2012.

It’s very common to see passengers with bikes on the weekends at Sangbong Station in Seoul, the first stop for the train that passes through Gapyeong and ends up in Chuncheon.

“I planned to get off at Gapyeong Station and ride back to Seoul following the Bukhan River cycling road with my girlfriend,” said Kim Dong-su, a rider from Seoul.

Cyclists onboard the train fasten their bikes to the rail of the subway car and wait. Twenty minutes later, the train is full of 20 to 30 bikes.

The subway arrives at Gapyeong in 40 minutes and the riders start to unload their bikes at Daeseong-ri Station, Cheongpyeong Station and Sangcheon Station.

The train finally arrives at Gapyeong Station one hour after departure. About 20 people get off the train, exit the station and start riding right away.

“Some riders who visit Gapyeong by subway stay one or two days at the Jarasum campground nearby,” said So Heung-won, a tourism interpreter at Gapyeong Station.

After remodeling, the Bukhan River riding course has become a mecca for bikers. The Gapyeong government planted 4,200 azaleas and 20,000 moss-pink flowers near Daeseong-ri Station, the entrance to Gapyeong from Seoul. 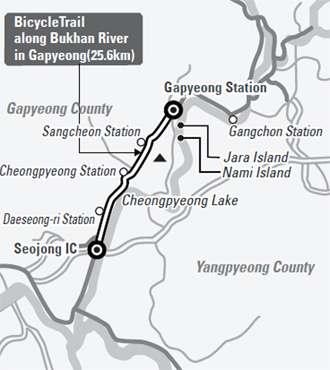 The mountain roads can be steep and dangerous as they are often rough and unpaved with curves and shallow valleys - attractive elements for lovers of mountain biking.

A five-kilometer abandoned train track in the middle of the Bukhan River cycling road is another attraction. It became disused in December 2010 because of the refurbishment of the Gyeongchun Line.

Cyclists can ride through the abandoned track, enjoying the scenery that old passengers of the now-defunct train route would have seen.

A favorite spot on the track is the 1.5-kilometer “sky” road, used to cross Bukhan River and Gapyeong River. The mountains and swamps here are shaped like a terrapin. Jara Island, Bukhan River and the sky all muddle together to create a beautiful scene.

A long-distance round-trip starting from the Han River, Seoul, is also popular. The 94.9-kilometer course, which takes a total of six and a half hours, is widely used. It starts from Seoul, passes Gapyeong and arrives at Sinmae Bridge in Chuncheon.

A 70.4-kilometer route that trails the whole Bukhan River cycling road is highly rated, too. 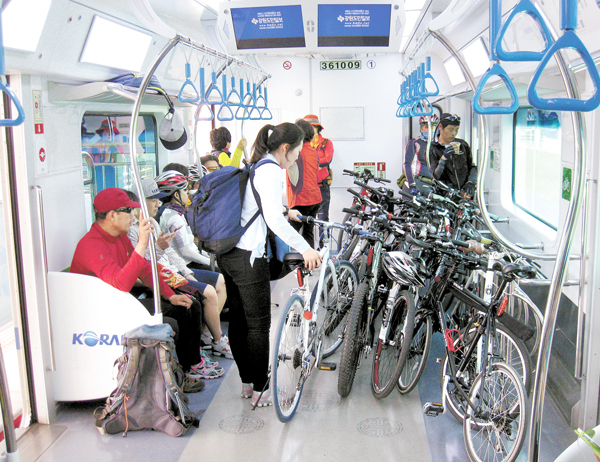 Riders and their bicycles crowd the tail carriage of the Gyeongchun (Seoul-Chuncheon) train. By Jeon Ick-jin

Middle-distance courses are also favored, such as the one between Daeseong-ri Station in Gapyeong and Sinmae Bridge in Chuncheon, which is 53.4 kilometers, and a route from Cheongpyeong Station to Sinmae Bridge that spans 45.6 kilometers

“The county took out a bicycle insurance plan for all the Gapyeong County residents for safe riding this month,” said Choi Min-sung, the acting governor of Gapyeong.

Gapyeong is working on increasing its tourism business by opening more trails alongside the abandoned railroad by September.