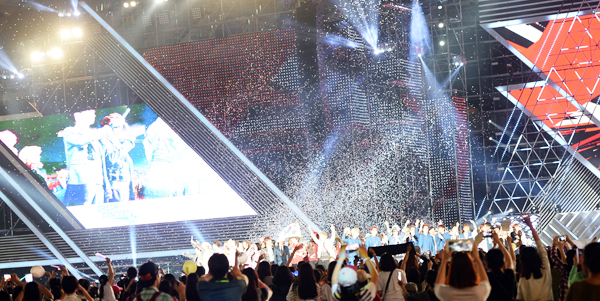 The biggest annual live K-pop show, Dream Concert, celebrated its 20th anniversary at World Cup Stadium in western Seoul on Saturday. First held in 1995, the concert has featured legendary Korean pop icons such as Seo Taiji, H.O.T., g.o.d. and TVXQ over the years.

Saturday’s concert was attended by more than 50,000 people and 33 K-pop groups from Girls’ Generation, Exo, and Beast to A Pink performed on stage. The concert was sponsored by the Ministry of Culture, Sports and Tourism.

Each year the event has a theme to raise awareness of social issues. In 1995 the concert marked the 50th anniversary of Korean Independence Day, and Dream Concerts from later in the 90s focused on fighting violence and illegal MP3 downloads.

This year’s concert was about remembering the Sewol tragedy, which took hundreds of high school students’ lives on April 16, while they were heading to Jeju Island for a three-day school trip.

The concert will be aired by SBS on Sunday.