A new approach to smartphone accessories

A new approach to smartphone accessories 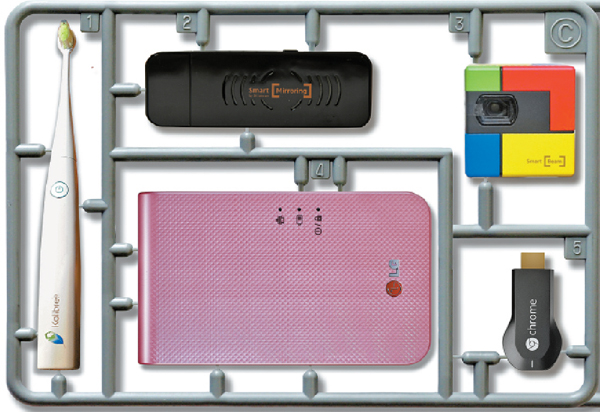 As newer versions of smartphones are being released at a rapid pace, sales of phone accessories are also up. But the concept of a smartphone accessory has evolved from just a leather case or dangling charm to an “appcessory” - a digital device that can be accessed through an app, such as a mobile printer or projector.

Google’s recently launched Chromecast streaming device sold more than 20,000 units in Korea in less than a month after its release. Chromecast, which costs 49,900 won ($48), resembles a USB and allows users to stream online media such as YouTube videos on their TV via a PC, smartphone or tablet. The device connects to an HDMI slot on a TV, which changes a regular TV into a smart TV.

“Chromecast was once the most sold electronic device on Amazon.com in America,” said Mickey Kim, head of Chromecast’s Asia-Pacific region.

SK Telecom on May 28 launched Smart Mirroring, a device that matches a TV screen with the screens of a mobile device. It costs about 50,000 won. 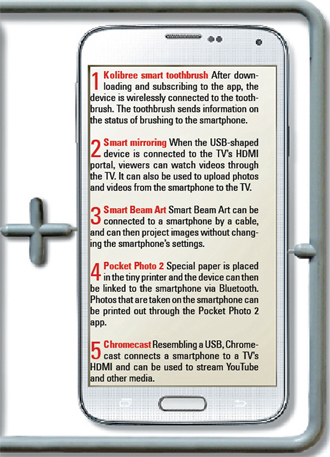 LG’s Pocket Photo 2, released in January, is the world’s smallest commercially sold mobile printer. It is about the same size as a smartphone and weighs 220 grams (7.7 ounces). A user can choose which picture they want to print and in what shape. When fully charged, the device can print 30 images. It costs 149,000 won.

In the absence of a portable smartphone accessory to do the job, users are turning to traditional devices that have Wi-Fi or Bluetooth capabilities. Many printers are now capable of receiving images and documents wirelessly, and some have near-field communication, which allows them to print out files from a smartphone that is placed near them without being connected.

Smart Beam Art, released by SK Telecom in November, is a 4.6-centimeter (1.8-inch) cube that weighs about 129 grams.

When it is connected to a smartphone, the tiny beam projector displays the smartphone’s screen and audio without having to adjust the settings. Cumulative sales of the device have reached 80,000.

A smart toothbrushing app has also become popular. The Kolibree smart toothbrush, launched at the Consumer Electronics Show 2014 in Las Vegas in January, tells a user how long they have been brushing and which parts of their teeth and gums have been cleaned. It also measures the pressure being applied.

The app encourages good brushing habits by scoring users on how well they brushed their teeth. The device costs between $100 and $200. The app can be downloaded to a smartphone, and then wirelessly connected to a toothbrush.

The smartphone appcessories market is expected to grow as new devices are developed. The KT economic research institute Digieco forecast that the accessories market, which was worth about 244.5 billion won in 2010, will increase to 1.9491 trillion won next year.

Digieco said that since the appcessory market is an “after market” that follows the development of smart devices, there are endless possibilities for new ideas.