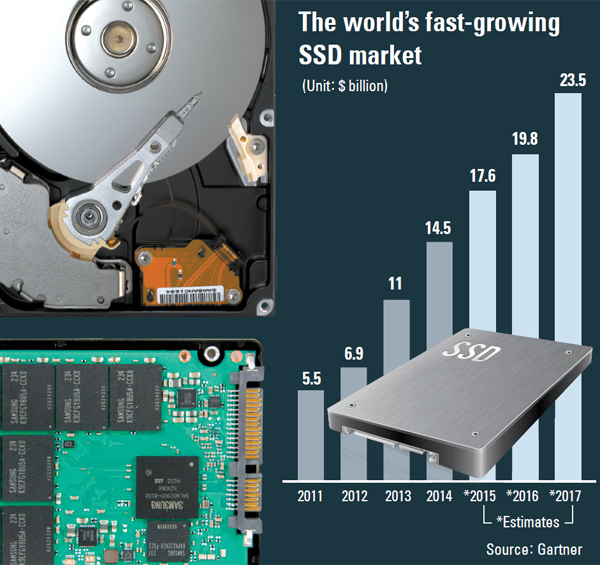 Memory chips have taken the place of hard disks, which spun at a rate of thousands of revolutions per second.

Chips reduce boot-up time to about seven seconds and allow software and the Internet to run faster.

In the laptop market, the trend is toward lightweight machines that weigh about a kilogram (2.2 pounds) equipped with SSDs.

SSD is a data storage device for computers made of flash memory that does not lose data even when the power is turned off.

The HDD widely used until recently reads and processes data by spinning a disk-shaped aluminum substrate. The motor generates noise and heat, and power consumption is high.

Since the SSD does not have moving parts, there is no noise. It is resistant to shock and impact, making it well suited for portable computers.

Lotte Hi-mart, the country’s largest electronics products retailer, said Wednesday that sales of SSD laptops shot up 80 percent this year through May, compared to the same period last year.

LG Electronics’ Ultra PC Gram, which was released in January, weighs only 980 grams. According to LG Electronics, average monthly sales of the Gram recently exceeded 10,000.

“More than 30 percent of Samsung’s laptops launched recently are equipped with SSDs,” says a spokesman for Samsung Electronics. “We will continue to expand SSD adoption even in low-end products.”

A growing number of consumers are swapping out hard disks in their existing laptops and installing SSDs.

Samsung Electronics even provides software that can transfer various kinds of data and operating systems on hard disks to SSD laptops.

Since SSDs are about 10 times faster than hard disks in terms of data-processing, users can experience like-new performance on their laptops just by replacing the HDD.

“As the SSD gains worldwide popularity, about 500,000 SSDs are sold each month separate from laptops,” says a spokesman for Samsung Electronics.

Samsung Electronics is No. 1 in the world’s SSD market, controlling 26 percent.