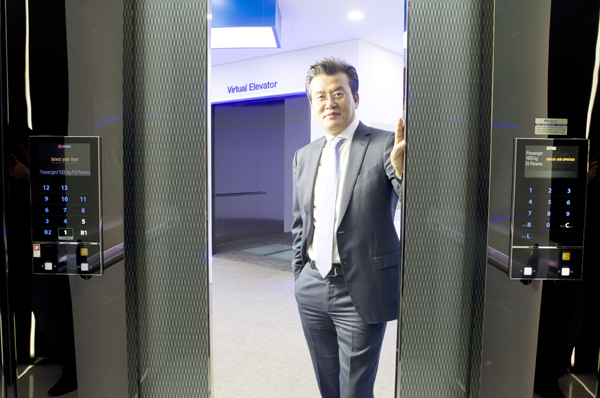 Cho Ik-seo, managing director of Otis Elevator Korea, shows off one of his company’s most sophisticated and technologically advanced elevators in the display room at the company’s headquarters in Yeouido, western Seoul. By Park Sang-moon

The first thing Cho Ik-seo, managing director of Otis Elevator Korea, proudly shows visitors is the company’s service information center, “OTISLINE”. The room is located in the corner of the company’s display room at the IFC building that is home to Otis Korea’s headquarters.

At first glance, it’s hard to tell if there is an another office next to the display room as the windows are tinted. But at the push of a button, the dark screen becomes transparent and on the other side is a huge monitor with a digital map of Seoul and other regions and 20 or so desks with engineers working at computer monitors.

“The ones that blink on the monitor are elevators that have some problems,” says Cho. “Most of the problems are fixed remotely by Elite Service engineer at OTISLINE.”

The Korean branch of the internationally known elevator company wasn’t the first to introduce Elite service among all Otis entities worldwide, but the company says the number of subscriber of Elite Service and their feedback is the largest.

The Elite Service, which was launched in 2008 in Korea, is part of the company’s enhanced service system.

The company says there are 2,000 engineers who can be dispatched immediately when there is a problem.

Elite service has taken the company to a new level against its competitors because it not only enhances response time, but increases the reliability of the products for customers thanks to efficient repairs.

To Cho’s way of thinking, sales figures and expanding market share aren’t the most important things. He believes the company’s priority should be continual improvement of customer services, which includes maintaining safety and quality control.

His management philosophy from his experience in working at a foreign company is two things; sticking to principle and communication.

Cho says a corporate principle covers everything from transparency to safety, quality control and ethics.

“Of course competing in sales is important,” he says. “But more important is safety, quality control and ethics. A company can see its sales figures surge as a result of an aggressive marketing strategy, but if it fails to continue to provide the services needed and only concentrates on its short-term performance, it won’t last long. For a company to survive, it needs to have a set of principles that it follows.”

He adds that communication is equally important in doing business. Many CEOs in recent years have been preaching better communication as a key for management without explaining what they mean. However, Cho truly believes that communicating involves more than just talking with employees or customers. He says a company can thrive by creating a strategy where both top executives and employees are ready to accept ideas. 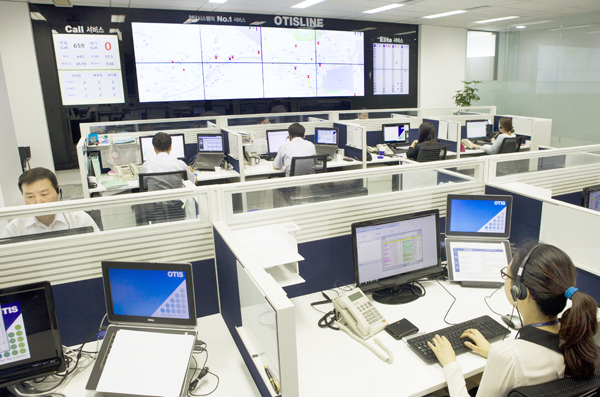 The company’s top engineers receive service calls at the Elite Service Center at company headquarters in Yeouido. Most of the problems are fixed remotely from the 24-hour center.Provided by the company

In addition to its own elevators that are developed at its corporate headquarters in the United States, Otis Korea also sells its Sigma brand that derives from the company’s purchase of LG’s elevator unit in 2006. Since acquiring the Korean conglomerate’s elevator business, Otis Korea has kept LG’s research center.

Although Otis Elevator does business in more than 200 countries, there are only eight research and development centers, one of which is in Korea.

Q. What is your business philosophy?

A.The most important thing for a company to last for more than a century is to have a principle and follow it. Some companies may emerge unexpectedly with innovative products. But many such companies have come and gone as fast as they rose to stardom. This is because they failed to have a set of principles that would gain the trust of customers.

I have worked in sales departments for 30 years. When I worked at LG, the first department that I was assigned to was sales. But serving as the head of foreign companies for more than a decade, I realized that keeping true to principles is more important than simply making sales.

Expanding the market share and increasing influence is important for a company. But just increasing the sales figure and ignoring customers’ satisfaction will only hurt the company as well as the overall industry in the long run.

A company that fails to follow its own principles and ethics code, the damages not only will affect employees and the company, but eventually the customers as well.

There are too many companies that are only focused on the competition. In order to increase sales numbers I have seen some of the companies lower prices. This is not a good idea. For the buyer, yes the price will be less. But in the process of lowering costs, companies are compromising the quality of the product by taking out some of the parts that may be essential for safety.

For a company to survive as long as Otis, it is essential that each and every employee stick to the principles and the code of ethics. Focusing on profits and working to continually develop innovative products are important, but more important to last long for a long time is to have a set of principles, which employees respect and follow. Only then will the competitiveness of the employees be raised.

For Otis Korea, such principles include transparency and safety. There can be no compromise when it comes to safety and quality.

When I was appointed to head Otis Korea, I, like any employee who joins the company for the first time, took an eight-hour course on safety.

Otis Korea has made it mandatory to keep checking safety procedures, especially in the field. I have made several unannounced visits to see if the procedures are properly exercised accordingly to the manual. Even with thorough safety precautions, accidents do happen.

There are some companies that consider following strict safety precautions a cost. And some consider such steps as an obstacle that only slows down the work.

Such careless actions can also be spotted in daily life. In Japan, those employed by the local government trimming bushes along the streets all wear hard hats. In Korea it’s not difficult to spot such workers along the street without any protective gear.

Just because the nation’s GDP goes up doesn’t mean a country is an advanced economy. Just because you’re rich doesn’t mean you’ve gained respect. Public awareness of safety has to be raised as well.

Tenaciously keeping true to safety precautions isn’t easy. In fact, it is a burden. But if one tries to take a shortcut, a new problem always arises.

I believe that if Otis Korea sets an example, eventually other competitors will follow.

Companies that fail to follow principles and become unethical will not last, as clearly proven in the case of Enron.

It is when a company is strictly obliged to follow its ethical code instead of focusing too much on the performance, that customers naturally trust the company. Investors will continue to place their money in the company and this will help the company to expand.

How do you see the future of Otis? Did the stagnant local real estate market affect your business?

Yes, overall the stagnant real estate market has had an impact on our business. Some of the leading construction companies have been suffering from deficits, while sales of newly constructed apartments didn’t do well as in the past. Overall volume has shrunk.

But we still have a lot of opportunities to further expand thanks to the continuous construction of high-rise elevators. If we keep to our principles in our innovation, including stepping up our services, we will continue to have the competitive edge.

Otis Elevator has always been at the forefront of innovation since Elisha Otis in 1853 cut the cable of a freight elevator during a demonstration of a safety device.

The history of the company’s innovation has been the safety of the elevator. Companies have been competing over how to create an elevator that could move fast and contain larger numbers of passengers and travel safely.

The market will likely continue to grow as urbanization has been picking up speed and new high rises are built.

We have been trying to lead the market in outstanding services. One is our elite service center. Half of Otis Korea’s revenue comes from our service management. Of course, the cost of our services is big, but we consider it not as a cost but sealing future revenues.

The goal of our company isn’t selling products. We are selling services, which is safety.

What is the key quality of a successful CEO?

Communication is the most fundamental attribute that a CEO should have. This is not only limited to employees, but also to customers as well as business partners. You have to know what is needed in order to plan a strategy that is practical.

The CEO needs to have the skills to align those strategies so they can be executed efficiently and smoothly. The successful CEO has the ability to execute. And such a person when moving to another job or moving on in life will still show leadership that gains the full trust of the organization. That’s what communication is all about. Not just words, but the willingness to listen and apply them.

The first step in communicating is the willingness to accept other people’s thoughts. This is not only limited to the CEO or top management. Different departments within an organization have to listen to what the other departments have to say, whether the other party is a technician or in marketing.

Only when people listen and accept ideas will true innovation emerge and this will eventually lead to creativity.

Since I have taken over Otis Korea as its president, the teamwork has changed. There’s more interaction and the employees are seeing the larger picture.

To fully understand what is happening in the market, one needs to communicate with customers. This will help in planning out a foolproof strategy and speed up any changes that need to be made. Communication does have an effect on the company’s sales.

What’s the strength of working at a foreign company?

The strength of working at a company like Otis is strong ethics and fair opportunities. If you look at foreign companies, there are a lot of female workers. That’s because the company works under a set of rules that respects regulations and laws, including labor laws, of developed countries. It not only guarantees working hours, but also guarantees pregnancy leave as well as childcare leave. In addition, in the case of Otis we invest in our employees by paying the full amount of their tuition whether it is for college or higher advanced education like an MBA. Anyone who has worked at the company for a year can apply for the tuition payments, and there are no disadvantages to studying. 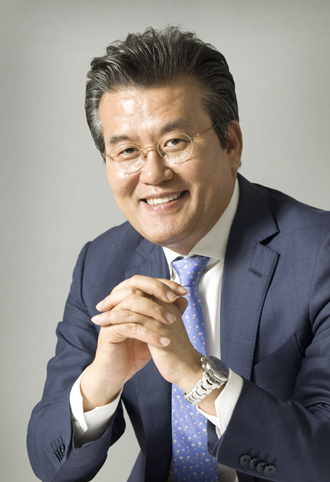