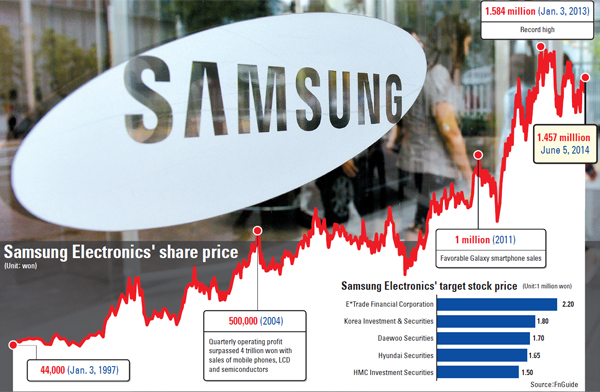 A fundamental change is taking place regarding Samsung Electronics’ stocks, the mega cap behemoth in Korea’s benchmark Kospi, according to the local financial industry.

The recent surge in share prices of the country’s bellwether stock was not only due to short-term investors, who have long seen Samsung shares as part of their emerging-market portfolio, but also due to an influx of long-term foreign investors, industry observers said.

Samsung Electronics finished trading at 1.457 million won ($1,427) on Thursday. The Kospi was closed on Friday for Memorial Day.

The driving force behind the increase is the possibility of governance reform at Samsung. Since Samsung’s IT service affiliate Samsung SDS and the effective holding company of Samsung Group affiliates, Samsung Everland, announced recently that they will go public, Samsung’s shares have risen higher.

“Because Samsung Electronics’ earnings forecast shows a slight downturn, its shares should have fallen,” said a spokesman for a securities company. “However, its governance reform rumors are dominating the stock market.”

Samsung increased the dividend significantly last year, but its share of dividends compared to its net profit, the dividend payout ratio, was left at 12 percent, which is much lower than the average for global companies at 36.8 percent.

The low dividends are related to the company’s cross-shareholding governance structure.

“Since the largest shareholders’ stake in Samsung Electronics was relatively low, there has been no incentive for Samsung to actively raise dividends and stock prices,” said Lee Chae-won, vice president of Korea Value Asset Management.

Forecasts that the situation will change have been pushing up prices.

Investors are hoping that the major shareholders’ equity will increase and favorable policies for shareholders will be part of the succession process.

In light of recent developments, some securities firms are raising the target stock price of Samsung Electronics. E*Trade Financial Corporation released a report on the company on Monday, setting the target price at 2.2 million won, a 30 percent increase from the current 1.7 million won.

“After 2015, Samsung Electronics’ dividend payout ratio will reach around 40 percent,” Kim Ji-woong, an analyst at E*Trade Financial Corporation, wrote in the report.

Various scenarios are emerging regarding the company’s possible approaches to corporate governance reform. The most common prediction is that Samsung Electronics will be split into a holding company and a business unit.

“Usually, when a company switches to a holding company system, the market capitalization increases about 20 to 30 percent,” said Lee.

But some pushed for caution regarding the rapidly rising stock.

“It is true that there is room for Samsung’s shares to rise if the company switches to a holding company system,” said Kim Young-chan, an analyst at Shinhan Investment. “However, it is still an assumption and even if Samsung did embark on reforming its governance structure, it would take a long time to achieve it.”