A multicultural makeover for traditional music

A multicultural makeover for traditional music 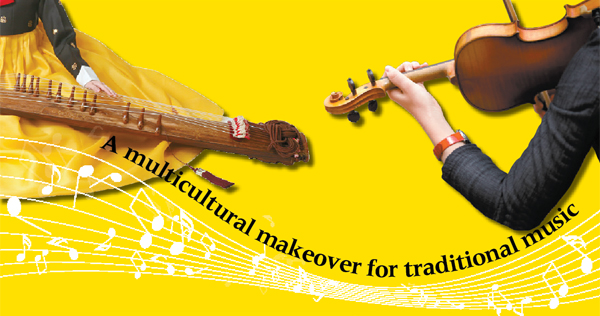 Traditional Korean music will get a new sound this week. The National Orchestra of Korea has invited four talented composers to unveil their own interpretations of local compositions in “Recompose,” a concert at the National Theater of Korea that premiers Friday.

“It is eye-catching that four foreign composers, who come from different backgrounds, present new works adapted from traditional Korean music,” said Kim Ga-yeon, a producer of the concert.

“Their efforts to satiate their musical thirst has contributed in making traditional music more available to the current generation.”

About a year ago, the group invited four foreign composers who hail from Belgium, the United States, Taiwan and Japan with expertise in traditional Korean music studies to put their own spin on older Korean music.

Baudouin de Jaer from Belgium chose to work on “Bukcheong Lion Dance,” while Takada Midori from Japan picked a variation of sanjo, a free-style solo performance of musical instruments.

While de Jaer and Takada are traveling from their home country, the other two, from the United States and Taiwan, are currently in Korea teaching composition to college students at Ewha Womans University.

Michael Timpson from the United States has written music inspired by the sounds of gayageum, a string instrument, and janggu, a traditional drum, among others. He is also interested in incorporating traditional Korean music with more Western music genres. For the concert, Timpson saw that he could harmonize Korean music with jazz and invited saxophonist Lee Jung-sik to perform his work.

Timpson’s wife, Chih-Chun Lee, who is also teaching musical composition at Ewha, has adapted a version of music that is widely used in traditional dances, including one that monks usually use for blessings, which is what Lee has named her work.

“The concert was organized as we wanted to learn how foreigners analyze traditional Korean music,” said the National Orchestra of Korea in a press release.

Since a concert with such a concept has never been tried before, the composers are anxious to learn what type of response they will get from local audiences.

“I’m a little worried because I’m not sure that the structure of my composition is clear enough as I took risks [in my composition],” said de Jaer.

“I hope audiences will enjoy the unconventional music structure, as [the concert will present] a new way to feel the Korean instruments and their sound.”

Japanese composer Takada also said that the adaptation of tradition with a modern touch is important because it can allow people to understand the current generation better.

“We come to see a change in values surrounding politics, culture and economics. Really, ‘tradition’ is an accumulation of innovation over time,” said Takada.

“Being able to do something in a ‘modern’ way is to grasp the essence of that accumulation. We all share this essence and that’s how you notice what is modern.”

While the other three composers try to recreate traditional Korean music through Western form, Takada’s approach was a little different.

“She tried to understand the music in the context of philosophical thinking,” said the National Orchestra of Korea.

Takada is refraining from using a conductor on stage. Instead, she is putting the musicians in a circle, as she wants to apply a topographical idea when arranging the traditional performers. She will be in the center of 12 others performing in a circle on stage Friday, and will be the only one out of the four foreign composers who will also be performing.