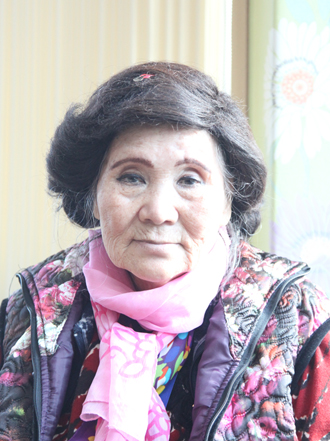 Another victim of sexual slavery by the Japanese Imperial Army during World War II passed away yesterday without hearing a formal apology from the Japanese government.

Bae Chun-hui, recalled by many as a skilled artist, singer and linguist, died at the age of 91 around 5 a.m. yesterday at the House of Sharing in Gwangju, Gyeonggi, said the head of the home, Ahn Shin-gwon. She died of old age.

The House of Sharing was established in 1992 as a home for surviving comfort women victims. It is supported by donations from Buddhist and civic organizations.

Bae’s death brings the number of surviving registered comfort women victims down to 54. Bae was born in 1923 in Seongju County, North Gyeongsang. In 1942, the 19-year-old Bae and a friend were tricked into accepting a job opportunity in Manchuria, where they were coerced into sexual slavery by the Japanese.

After four years of sexual slavery, Bae eventually returned to Korea but had a hard time adjusting back home. She moved to Japan, where she worked as an amateur enka, or Japanese folk song, singer. She finally returned to Korea in 1980, but was scammed by a relative and lost all her savings. She registered with the Korean government as a sex slave victim of the Japanese army in 1993 and began living at the House of Sharing in May 1997.

Over the years, Bae was an active voice for the rights of the former sex slaves and participated in the weekly demonstrations demanding an apology from the Japanese government until her health worsened three years ago.

The rallies held every Wednesday in front of the Japanese Embassy in central Seoul are organized by the the Korean Council for the Women Drafted for Military Sexual Slavery by Japan. They have been held every week since January 8, 1992. The protesters call upon the Japanese government to take full legal responsibility, officially apologize and compensate the sex slave victims.

The Japanese government maintains all colonial and wartime compensation issues were resolved in a 1965 treaty which normalized relations between Japan and Korea, despite the comfort women issue becoming publicized only in the early 1990s.

Ahn recalled Bae as being skilled in languages, including Japanese, Chinese and Russian, conversing with students who volunteered at the house with great fluency and serving as a natural foreign language instructor to them. She also played the janggu, a Korean percussion instrument, and was talented in painting. “She left behind many art pieces,” said Ahn.

Bae had been bedridden since last September.

Bae’s wake was held at the Cha Bundang Medical Center in Gyeonggi, and her funeral ceremony will proceed from the House of Sharing tomorrow.

The Korean government had 237 Korean comfort women registered officially, though many have passed away over the past two decades. Of the surviving registered victims, 49 live in Korea - nine of them in the House of Sharing - and five live abroad.

“It is getting harder and harder for the grandmothers to keep on,” said Ahn. “Our government has to hurry and negotiate with the Japanese so that the remaining [victims] can spend the rest of their lives in ease.”

Japan and Korea are set to hold a third round of director-general level negotiations to work toward resolving the comfort women issue in Seoul later this month, but time for a resolution is running out.