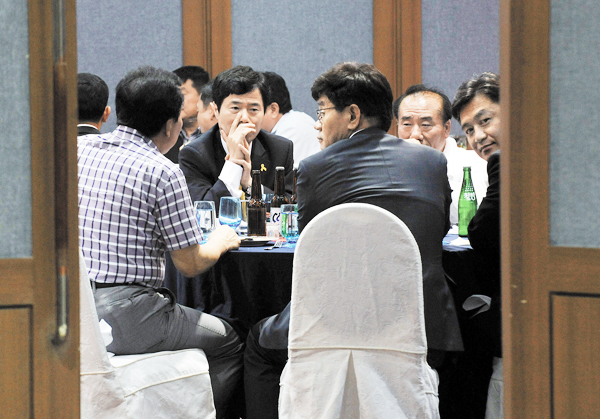 After the June 4 local elections gave an unexpected sweep to liberal candidates for education superintendent, seven of the progressive education chiefs held a closed-door meeting Saturday in order to discuss how to make concerted efforts to promote their education policies.

The meeting, held at the Adria Hotel in Daejeon, was attended by seven of the 13 liberal education chiefs elected last Wednesday, including Min Byeong-hee of Gangwon, Kim Seung-hwan of North Jeolla, Lee Cheong-yeon of Incheon and Jang Hui-guk of Gwangju. Also in attendance were Kim Byung-woo of North Chungcheong, Lee Seok-moon of Jeju and Choi Kyo-jin of Sejong.

Victors who couldn’t make it, such as Seoul’s Cho Hi-yeon, sent aides. Liberals won 13 out of 17 education superintendent positions for Korea’s major cities and provinces. In 2010, only six liberals won, which was their best performance up until then.

The victory of the liberals is attracting a lot of attention because their policies will likely conflict with those of the conservative Park Geun-hye administration.

Major policies championed by the liberal side include building schools that emphasize character building and creativity and abolishing or downsizing expensive self-governing high schools and foreign language high schools, which they consider elitist.

After the meeting, the attendees refused to reveal details, saying the discussions were private.

“We shared our ideas and confirmed our common ground to implement [liberal] education reforms,” said Jang Hui-guk, the Gwangju superintendent-elect.

“We already pledged to come together to adopt the policies in our regions before the election,” he continued, “but this meeting was intended to discuss specific ways to implement the policies while we are in office.”

“We didn’t expect the election results. So, we will cooperate with each other to fulfill the public’s expectations.”

Before the election, the liberal candidates signed a joint pledge of common progressive reforms at the Korea Press Center in central Seoul.

The pledges, aimed at relieving competition and back-breaking study by students, include making textbooks and the curriculum easier, prohibiting students from getting to school before 8 a.m., considering the closing of some expensive and prestigious private schools and forcing private cram schools to reduce classes on weekends.

Some analysts wondered how far the newly elected education chiefs should go with their joint agenda.

“I think it’s always a good thing for decision makers to gather and discuss their policies and ideas,” said Kim Seong-yeol, an education professor at Kyungnam University.

“But, the joint pledges could ignore the differences between each region,” the professor said, “and they can trigger tensions with the central government.”

After their election landslide, the new superintendents are being scrutinized carefully. Seoul’s Cho Hi-yeon is known as a civil activist as well as a central figure in progressive academia. Cho led a society consisting of liberal-leaning professors while founding a major liberal NGO, the People’s Solidarity for Participatory Democracy.