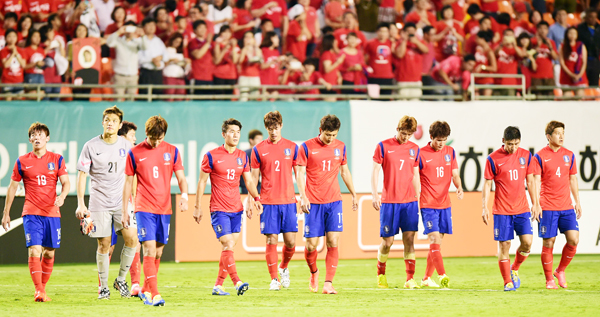 Korean national football team Coach Hong Myung-bo said he wanted to learn something from the final friendly match against Ghana. He must have learned one thing for sure ? the team will not be able to win a single match if it continues playing like it did last night.

In the 1-0 loss to Tunisia last month, Korea failed to dominate the midfield area and poor passing resulted in few scoring chances. The Taegeuk Warriors had exactly the same problems yesterday at the Sun Life Stadium against Ghana, losing their final warm-up game, 4-0, before the 2014 Brazil World Cup that starts Friday, Korea time.

Since the team has failed to improve despite training to fix its problems, the expectation that Korea will succeed in the tournament is lower than ever, and it is questionable whether the squad will be able to earn a single point against its Group H opponents. The other teams - Belgium, Russia and Algeria - have gone undefeated in their past three friendly matches.

“There is always something to learn no matter if we win or lose a match,” Hong said after the match. “Allowing four goals obviously isn’t a good thing, but I will try to find a way to make this loss affect the team positively. Allowing the first two goals too early in the match was too hard to overcome, which is something we should improve on so we can play better in the remaining time until the World Cup kickoff.”

Using his favored 4-2-3-1 formation, Hong fielded 11 of his best players, most of whom started against Tunisia. The biggest change was in his defense line, as he started veteran Kwak Tea-hwi and Kim Chang-soo instead of Hong Jung-ho and Lee Yong. The other defense spots were filled by Kim Young-gwon and Yoon Suk-young.

Hong’s sqaud was more aggressive than in the Tunisia match, but things got ugly quick.

Ghana forward Abdul Majeed was replaced by Jordan Ayew only four minutes into the first half, and Ayew soon became the biggest threat to Korea after he scored in the 13th minute with a shot from 15 yards that deflected off Ki Sung-yueng and past goalkeeper Jung Sung-ryong. He continued to send strikes past the keeper in the 53rd minute and 89th minute, stopping Korea’s breath.

Veteran Asamoah Gyan also scored a goal after intercepting the ball in midfield from defender Kwak, who approached the referee to appeal to him for not calling a foul.

Korea failed to create scoring chances except for one that let Son Heung-min come close to an equalizer when he hit the post in the 10th minute. After the missed chance, Korea was knocked out by counterpunches from Ayew and Gyan.

Midfielders such as team captain Koo and Ki made no effective passes to attackers. As the Koreans had a hard time finding teammates to receive passes, players such as Son and Lee Chung-yong often relied on inefficient dribbling, making it easier for the Ghana players to take the ball.

“Our physical condition is only about 60 to 70 percent out of 100,” said Lee Chung-yong. “We need to get better quickly for sure.”

The biggest disappointment in the offense was, again, striker Park Chu-young. In the 64 minutes he was on the field, he attempted only two shots, which didn’t even get close to the goal.

Before the match, Hong raised expectations that the 28-year-old striker would shine, saying Park’s physical condition is better than when he played in the 2012 London Olympics, where he led Korea to the bronze medal against Japan. Then, Park contributed to the team’s 2-0 victory by scoring the first goal, but the accuracy of his shots in yesterday’s match clearly prove he is still miles away from top form.

The undeveloped defensive line, which Hong says he is still working on even though the match against Russia is only a week away, was awful and their play looked similar to a middle school team.

After the disappointing Tunisia match, Hong said he would work on improving the defense’s blocking ability, but yesterday’s defense was even worse than before. Not only do the defenders perform way below expectations on an individual basis, but Hong still isn’t able to decide on the best four. The newly tested Kwak and Kim Chang-soo, who were put in the two right positions, were incapable of chasing the opponents’ speedy attackers and looked as slow as blind turtles.

The test was a complete failure and Hong proved that by replacing Kwak after the first half with Hong Jung-ho and replacing Kim with Lee Yong in the 50th minute. Even Ghana’s Coach James Appiah worried about Korea’s defense. “Korean defenders should be more careful in the World Cup, especially when they face a speedy team like us,” he said.

“I think the team didn’t show its best yet,” Hong said. “As we have about a week until the first match, I will use the time wisely to get things better.”