A snapshot of life with McCartney

A snapshot of life with McCartney 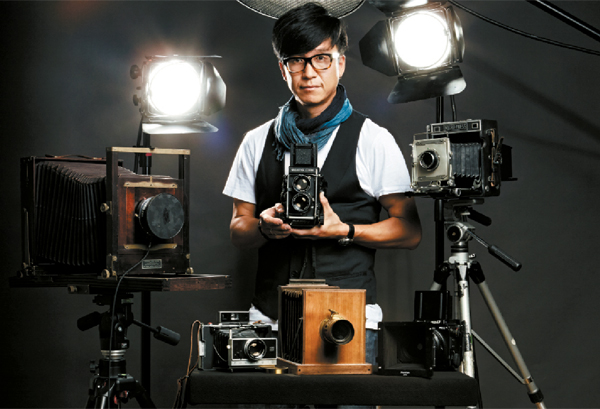 MJ Kim is in charge of photographing Paul McCartney of the Beatles. Provided by MJ Studio

The credit for many images taken of former Beatles member Paul McCartney goes to MJ Kim, who has also captured several other global stars with his camera, including Michael Jackson, Johnny Depp, Natalie Portman, Paris Hilton, and David and Victoria Beckham.

For Kim, finding his passion in photography, especially in portraits, was accidental. He originally dreamed about becoming a movie director while studying abroad in London, where he moved in 1995. But after the Asian financial crisis in 1997 affected his family, he had to find work to support himself in the foreign city. As his interest was shifting to photography at the time, he decided to take photos for money.

“I didn’t speak fluent English, had a hard time understanding the different culture, and I had [not so much background in photography] as I was studying it on my own,” Kim recalled in a recent interview with the JoongAng Sunday, an affiliate of the Korea JoongAng Daily.

In 1998, one of Kim’s photographs was featured in The Guardian newspaper. It was a shot of the popular group Spandau Ballet, which was in the middle of a legal dispute after disbanding. Kim spent all his day on the street, trying to get a candid shot of the group amid fierce competition from local photographers.

He was hired as a freelance photographer at the Daily Telegraph about a year after.

“I was so thankful that no one refrained from teaching me tips,” said Kim. “I never felt any discrimination against my race, and I felt really delighted when [a company] chose to use my photo even when they had dispatched their own photographers,”

Kim was later offered a full-time position at the Press Association, a British wire service. The company set up a new entertainment photo department and asked Kim to head the team. It even offered to sponsor his visa.

But the U.K. immigration office questioned why the company needed to hire Kim when it wouldn’t be difficult to find a substitute within the EU who wouldn’t need sponsorship. Kim went door to door asking for help from photographers and editors in chief he had kept in touch with.

“There were more than 50 people who signed the petition,” Kim said. “It was so heartwarming that they all took on this matter as if it were their own.”

Working at the Press Association from 2001, Kim went to many big-name global events, including the Academy Awards and the Cannes International Film Festival. He started to build up connections.

“I realized I loved taking portraits,” said Kim. “I like to meet people and draw what’s hidden inside them.”

He got a job at Getty Images in 2004. He joined the royal media team and followed Prince Charles and his wife, Camilla, on a two-week state visit to Egypt, Saudi Arabia and India.

The network Kim had created meant he could return to freelance photography. In 2007, soon after he came back from a world tour with the Spice Girls, Kim was asked to work with Paul McCartney by an acquaintance working in public relations.

The same person also connected Kim to Michael Jackson, and the photographer snapped images of the global star at a press conference in London.

“In the field I’m in, some small group of people becomes the connecting bridge,” Kim said. “It is so hard to be in that connection, as you get tested for your ability, personality and others through many steps, but once you are in, it gets easy.”

Some time after Michael Jackson died, McCartney contacted Kim again to cover his world tour, and in 2009 Kim started traveling to countries across the world as the star’s official photographer.

Kim had some unexpected time off as McCartney canceled his concert in Korea due to health issues. Instead of taking photos of the singer for his fans, Kim talked about the star and what it’s like to photograph global celebrities.


Q. When did you first meet Paul McCartney?

Left to Right: A photo of David and Victoria Beckham taken by Kim, Johnny Depp shot by Kim, Kim’s photo of Natalie Portman

A. The first work I did was take a photo of him hanging a photo of his wife, Linda, in 2008 when her book was published.

What was he like after you got to know him a little better?

Paul doesn’t know how to read a musical score or how to write one. But he is a genius who knows how to play all musical instruments. Also, he always looks for some new sound. For example, if he hears a drum sound used by a native African, he will listen further and use it in his music.

Although he is an almost God-like figure, especially in the United States and the United Kingdom, and some really high-level officials long to see him, he is a warm and modest person. He puts family as his top priority. He is happy that he is known as a father of Stella McCartney these days. I really want to be [a person] like him who has popularity, wealth and modesty all at the same time.

What does he say about photography in general?

He has great passion. It is always nerve-racking to talk about photos with him. He knows a lot about the arts. It is very stressful for him to think that you need to show something new continuously to the public.

How many photos do you take?

Depends on the schedule. I normally take 1,000 shots a day and choose up to 50 to show Paul. I also retouch the photos, and that barely gives me time to spare. There used to be a team doing the retouching, but I wanted to give them my own touch, so I do it on my own.

Wasn’t it hard for you to work because your English was not so fluent?

I actually used my weakness of being a minority with poor English skills as my forte. People remembered me more, and they tried to understand what I was saying because I become a director on the spot [when taking photos].

A composite photo of Paul McCartney performing taken by Kim.

Do you think you have many people looking out for you?

Because I lack in many things, I had to be much nicer to the people around me. I kept a good relationship with intern reporters and PR officials. As we grow old together, we became each other’s strong supporters.

What was your strategy in keeping a good relationship with others?

Of course many would say they do their best. I also did my best to make my client happy under any circumstances. I tried to understand what my client wanted, and if things did not go well as the client intended then I tried to fix the outcome as much as possible. I thought of my work as a communal project. I thought it was OK for me to see some losses on my side, and my clients appreciated [my attitude].

Don’t you want to establish your own style?

People who call themselves professionals reflect their life in their work. Sometimes I get jealous of those photographers who have developed their own distinct style. But I like sending people off who come for my work with a happy smile. I still get nervous that my clients are not going to like my photos. Paul once said that he can’t really sing the songs he likes because his fans come to hear their favorite songs. I like this attitude.

Why did you come to focus on taking portraits?

I like meeting people and hearing stories. During the photo-taking session I come to have some special emotional ties because the experience means that [my subjects] are showing their naked soul. I like those surreal and dreamlike feelings when I realize that [my client and I] clicked.

You must have many different cameras. Any particular camera you like?

I love analogue. I make good use of many cameras, from toy cameras to a camera that is 100 years old. I’ve thought about why I have a preference for those. Digital devices make no mistakes. If you do make a mistake, you can just delete that photo and take another one.

However, working with analogue will entail some unexpected outcomes, and sometimes you can’t fix those unexpected outcomes. I think that’s so humane. Having both good and bad [inside me] is what makes me. Would I like [me] so much if I could be reformatted without my flaws?

I’m just saying that people put in less effort. In this digital generation, everything is at your fingertips. Photos these days are especially too disposable. They are something to be discarded after a quick look on Facebook or Instagram. Before, when we used film cameras, we had to invest more time and effort, just like people who would listen to LP music had to keep their disks and machine cleaned. I have been using the collodion process, a photographic skill that came in 150 years ago, for about a year now. You put chemical liquid either on metal or glass to make a photo. I cherish the effort and time put in to make a great picture.

What is it like to work with globally known celebrities?

Top stars are really considerate. Johnny Depp, when I was nervous, told me in a very serious mood that he will follow my instructions no matter what. I realized that attitude of putting others first put him in that top position.

I feel like someone out there is sending me blessings so that I can be where I am right now. I want to work more diligently for my family, and I want to do good things for others. I have been working on a project established to help people in need through a global organization affiliated with the United Nations. The project includes top stars that I have worked with. I think I was led to take photos to develop this project.