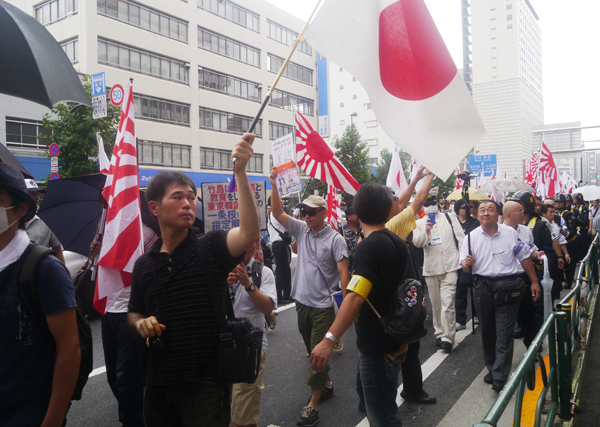 A Japanese right-wing group stages an anti-Korea protest in Korea Town, Tokyo, last September when Tokyo was chosen as the host city for the 2020 Summer Olympics.

“There are many things I like about Korea, but there are still things I don’t like,” said Katsumi Sawada, the Seoul bureau chief of the Japanese newspaper Mainichi Shimbun, when asked if he liked Korea. Among Japanese journalists, he is notably favorable towards Korea. If he can’t say, “Yes, I like Korea,” without hesitance, we don’t even need to ask how the majority of Japanese feel about our nation.

But it is the same the other way around. When I visited Tokyo, Osaka and Kyoto last month, I, too, was asked the same question. When asked if I liked Japan, my answer was the same as Mr. Sawada’s.

Mr. Sawada first confessed his ambivalent feelings about Korea in his book, “Korea Deviating from Japan,” which he published after working as a Seoul correspondent from 2006. In the book, which analyzes Korea, he wrote, “Korea is changing at a spectacular speed” and “Korea is deviating from Japan. Japan must admit that Japan is no longer a special country for Korea.”

In 2006, the Korean Wave was at its peak and Japan was trapped in the long tunnel of the “lost two decades.” Eight years have passed, and the situation has reversed. Japan has escaped the prolonged slump, and its economy is gaining new vitality. Diplomatically, Tokyo is bold enough to engage in territorial disputes with China. The Korean Wave is past its prime, and the Korea-Japan relationship is at its worst ever.

A summit meeting has not been held for 16 months since new administrations began in both countries, and there is also emotional discord between Korean and Japanese people. The Hankook Ilbo and the Yomiuri Shimbun published a joint survey on June 7 in which 83 percent of Koreans and 73 percent of Japanese respondents said that they didn’t trust the opposite country. The percentage of Japanese people who trust Korea has fallen 14 percentage points in a year, from 32 percent to 18 percent. It is the lowest since the annual survey began in 1995.

Japanese stores used to display books like “Why Is Japan Misunderstood?” in the past, but lately more provocative titles such as “Korea in Delusion” and “Ridiculously Bad Korea” are conspicuously displayed. Korea is not deviating from Japan - Japan is breaking away from Korea.

Why is the antagonism spreading? Japanese reporters I met in Tokyo said, “Japan is increasingly feeling hurt. Many Japanese people think, ‘If you don’t like us that much, then, that’s fine. There’s nothing we can do about it.’?” The cold feelings between the political leaders may be proliferating among citizens as well.

Many Japanese think Korea is not being helpful and is actually interfering with Japan at a time when it has barely recovered confidence and is making a comeback after 20 years. If the emotional drift intensifies, normalizing the Korea-Japan relationship is going to be harder than ever.

But Korea and Japan cannot and should not give up on each other. Next year marks the 50th anniversary of the normalization of Korea-Japan ties. Lawmakers must not use the Korea-Japan relationship for domestic politics. Financial Times’s Asia specialist David Pilling’s book “Bending Adversity” denounces the lack of historical awareness of the Japanese government.

At the same time, Pilling said that the Korean government has “become adept at switching on old hatreds when it suits them.” While the Abe government’s history distortion and the Park Geun-hye administration’s protests are targeting one another, they are actually using this to benefit their domestic politics. If Korea and Japan turn away from each other, who will it benefit? We need wisdom to end the race of mutual destruction.

*The author is an international news writer of the JoongAng Sunday.