Mr. Lee, a 32-year-old office worker, considers himself lucky - not because he has a stable job, a family and good friends but because he was able to buy Happy Meal sets from McDonald’s that come with Super Mario toys before they ran out.

“I managed to get two of the four different Super Mario toys [on May 30],” Lee said. “It reminds me of the old days when I played Nintendo. I was good at it.”

“My friends envy me because I already have two toys,” he said. “Next week, I think I’ll be going to McDonald’s for lunch quite often to get the rest.” 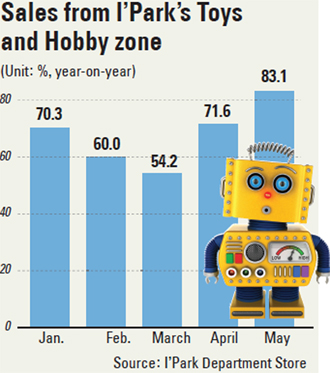 Lee is among a growing number of Koreans that have been given the nickname “kidult.” A kidult is a person in their 30s or 40s that enjoys toys.

According to McDonald’s Korea, it ran out of the Super Mario toys that come with Happy Meals just three days after sales began on May 30. It had planned to release four other Mario toys on June 23 but with the unexpected popularity, it moved up the date to next Monday. The four new toys will be Fire Mario, Boomerang Mario, Princess Peach and Yoshi.

“Although we cannot disclose how many Super Mario toys we released in the first round because it relates directly to our sales, all of the toys we had prepared ran out in a short period,” said an official from the fast food chain. “What we found interesting was that the toys ran out in just one day in our stores located near business-clustered areas like Jongno and Gangnam rather than residential areas where you would think there would be more demand for toys.”

“In the past, self-assembled toys and model kits were mainly purchased by people who really love toys,” said an official from Lotte Mart. “Now, they have become more popular and sales have gone up in recent years.”

According to Lotte Mart, sales of toys with wireless remote controls have jumped 20 percent every year for the past three years and sales of remote-controlled cars almost doubled in 2013 from 2011.

“I have always had this fantasy about mini motor cars,” said Kim Hyun-joong, a 34-year-old office worker. “The fantasy built up as a child when I saw actors in the Mexican drama ‘Carrusel’ riding in mini cars.”

He recently bought a mini car with a wireless remote control to share his memories with his 3-year-old son.

“Toys are no longer for kids,” said Kim Jin-wook, head of Toys R Us at Lotte Mart. “The range has expanded to include dads.”

Amid the demand for toys among grown-ups, I’Park Department Store in Yongsan, central Seoul, expanded its Toys and Hobby zone.

“At first, we opened a store selling figures of Gundam robots,” said an official from I’Park Department Store. “They were very popular, especially among men in their 30s and 40s, which led us to expand the store with other brands as well.”

Sales have been promising. According to I’Park Department Store, in January, sales of kidult toys in the toys and hobby zone jumped 70.3 percent compared to the previous year.

The main consumers of kidult toys are men born in the 1970s and early 1980s who have purchasing power. Unlike their parents’ generation, they grew up in a culture where they were exposed to plastic models and toys mainly from Japan and they now consider the toys as interior design items and fashion accessories.

Kim Jung-ju, chief executive and founder of NXC, the holding company of Korea’s No. 1 game company Nexon, for example, is a known kidult. As a fan of Lego, he recently bought BrickLink, a Lego trading-site.

“In the past, many kidults felt somewhat shy playing with toys,” said Seo Il-yeop, head of marketing at I’Park Mall. “The latest trend is that these toys have become objects that the whole family can enjoy openly.”