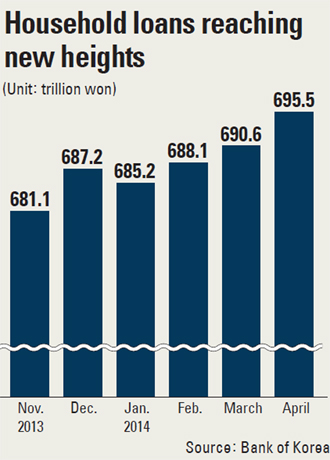 Not only are fresh loans in April twice as much as the 2.4 trillion won seen in March, they represent the largest monthly increase this year. The last time fresh loans have grown so sharply was in December, when 6 trillion won was added.

Household debt has set a new record each month since February.

The central bank cited an increase in home sales as the main reason for the April increase.

“Housing transactions in April grew from 89,000 units in March to 92,000 units,” said a BOK official. “Usually, the moving season starts in April, which pushes up household loans.”

The trend is likely to continue for May and June as many experts expect the central bank to tighten monetary policy as early as the third quarter.

The central bank has kept the key interest rate at 2.5 percent since May 2013. Many market insiders expect the central bank to leave the key rate unchanged during its monthly monetary policy committee meeting on Thursday.

The ever-growing household debt has been a significant concern. On top of the recent impact of the Sewol tragedy that shrunk consumer spending, the high level of debt is considered a risk to the central bank’s target of 4 percent growth in the gross domestic product this year.

In a report released Monday, Moody’s projected the Korean economy will maintain solid growth because the nation’s fundamentals remain strong.

It noted that Korea’s economy is gathering momentum, although the Sewol tragedy will have a “transitory dampening effect.”

But it also mentioned the high level of household debt as “potentially” a key constraint.

When adding in credit card purchases, total household debt as of March stood at 1,024.8 trillion won, which is the highest ever recorded. 