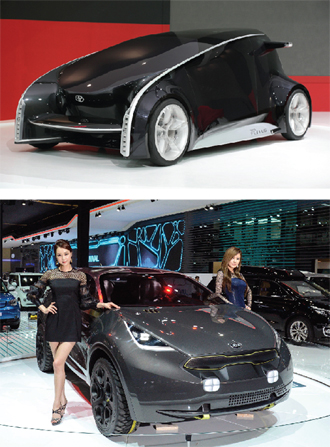 The seventh Busan International Motor Show (Bimos) ended its 10-day run on Sunday at Bexco after drawing a record 1.15 million visitors, exceeding its previous record of 1.1 million in 2012.

Although the atmosphere for this year’s event was not very joyful due to the Sewol ferry tragedy, the motor show in Korea’s second-biggest city displayed the largest number of cars ever, with 211 on display.

Some of the cars were new and awaiting their upcoming entry into the market. Others were displayed to show the future of automobile design nd technology, referred to as concept cars.
a
At Bimos, the number of concept cars is small compared to other renowned auto shows, but the concepts were all making their debut at a Korean exhibition.

Hyundai Motor, the nation’s largest automaker, caught visitors’ eyes with the introduction of its Grandeur Diesel and AG, the new luxury car that is between a Genesis and Grandeur, but the Intrado concept car also should not have gone overlooked.

Visitors were first amazed by the slick design of the small sport utility vehicle, but the specialty of the Intrado, which was first introduced at the Geneva Motor Show in March, is its carbon fiber body. The Intrado’s chassis was also on display at Hyundai’s booth.

The Intrado’s carbon fiber is supplied by local chemical company Hyosung. Hyundai said that the use of carbon fiber reduces the weight of the car by 60 percent compared with other chassis. The Intrado is powered by hydrogen fuel cells, and the automaker says the vehicle can be driven for up to 600 kilometers (373 miles) on a full charge.

Kia Motors, Korea’s second-largest automaker, displayed its GT4 Stinger and Niro concepts. The former is a rear-wheel model that many see as Kia’s next big sports car. The GT4 Stinger, which was first unveiled at the Detroit Auto Show in January, has 315 horsepower.

The Niro is small crossover utility vehicle. Its gull-wing doors, which doors are hinged at the roof rather than the side, are eye-catching, but the Niro also impresses under the hood. The hybrid SUV has a 1.6 Turbo GDi Gamma engine and electric motor combined with a seven-speed double-clutch transmission.

Visitors to the event who brought their children would have had to make a stop at the Chevrolet booth because GM Korea was showing a Camaro concept that was used in the movie “Transformers 4” as Bumblebee.

The sports car, which has an upgraded design from the fifth-generation Camaro, was displayed next to Transformers robots, creating a great photo op.

Visitors who took a careful look would have noticed the car’s glass roof, which depicts a map of Paris, showing the city’s districts and the River Seine.

Probably the most exotic looking car at Bimos was Toyota’s Fun Vii (Fun-Vehicle interactive Internet). Referred to as a “smartphone on wheels,” the concept is entirely covered by a display panel, both on its interior and exterior. Using smartphone applications, the exterior of this car can be changed to look however the driver desires. Toyota said that the car ultimately represents connectivity between vehicles, people and society.

Toyota also displayed the NS4 Concept at its booth. This midsize sedan is the next-generation plug-in hybrid from the Japanese automaker, a step past its Prius hybrid.

Volkswagen held the Asian premiere of its diesel plug-in hybrid concept CrossBlue. The six-seat midsize SUV looks like normal SUV, but it is designed with the German automakers’ next-generation MQB platform and has a fuel efficiency of 37.8 kilometer per liter, an impressive figure for a four-wheel drive SUV.

Jaguar unveiled its first sport crossover concept C-X17 in Busan. The five-seat SUV has aluminum monocoque architecture, the body structure that the company will use in its future cars. The development of XE, a new sport sedan set to be released next year, is also based on C-X 17.

Cadillac showed Elmiraj, the coupe version of its Ciel convertible concept it introduced in 2011. Not only is it creating a frenzy with its fancy design, the four-seat rear-wheel drive Elmiraj can produce 500 horsepower.