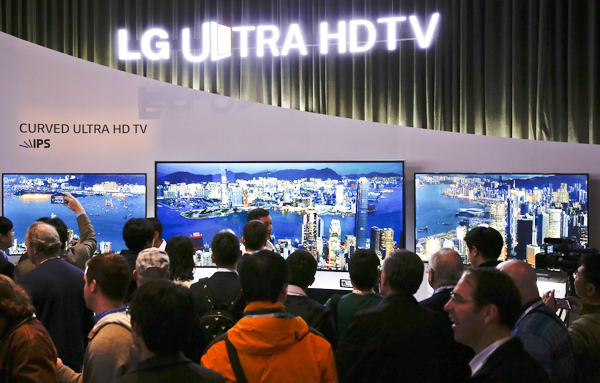 A company spokesman said yesterday it will launch the 77-inch and 65-inch curved UHD OLED TVs as soon as the third quarter.

It will be the first time an OLED panel is used in a UHD display, which has four times higher resolution than full HD.

LG has been investing in the self-luminous organic material OLED, targeting the OLED TV market, for the past few years.

LG introduced the world’s first 55-inch curved OLED TV in April and a 55-inch curved UHD TV last month priced at 5 million won ($4,915), but they were all equipped with full HD display.

LG also aims to expand its share of the global UHD TV market, where Samsung Electronics is the No. 1 player with a share of 21.6 percent in the first quarter, according to global market research firm Display Search.

LG was the fourth-largest player with a 10.6 percent market share due to its relatively weak UHD TV lineup, even though it released the world’s first 84-inch UHD TV.

LG has expanded its UHD TV models by adding OLED panels and introduced the OLED UHD TV at the Consumer Electronics Show in Las Vegas in January and at its own new TV product launch event in March.

And it has been attracting much attention concerning when they will be available to consumers.

“LG’s strategy of enhancing its UHD TV lineup is aimed at raising the market presence, which has lagged behind Samsung,” said a market analyst. “In addition, LG also secured price competitiveness as its production efficiency for OLED panels has reached nearly 80 percent.”

In order to maintain the price competitiveness, production efficiency must reach 90 percent, meaning that only 10 percent or less of displays produced fail to meet quality standards for sale to consumers. LG’s current production yield for LCD panels is 90 percent.

Accordingly, the competition between the No. 1 Samsung and No. 2 LG in the world television market over UHD TV picture quality is expected to intensify in the second half of the year.

Samsung Electronics has launched curved UHD LCD TVs in sizes from 105 inches to 155 inches since early this year to lead the UHD TV market. The products were accompanied by aggressive marketing promotions aimed at differentiating its curved screen televisions from the competition.

However, undermining the marketability of OLEDs, Samsung said it is currently focusing on the premium and affordable curved UHD TV products.

OLED TV prices are still about 2 million won higher per unit than for LCD UHD TVs.

“If LG’s curved UHD OLED TV prices are lower than those of LCD UHD TVs, they will be competitive,” said an industry official.

However, as the production yield of OLED panels rapidly improves, some industry observers predict the OLED TV market will take off in the second half of this year.

Although the electronics company lost its leadership in the UHD market to Samsung and Japanese and Chinese manufacturers such as Sony and Hisense, its televisions are its flagship businesses.