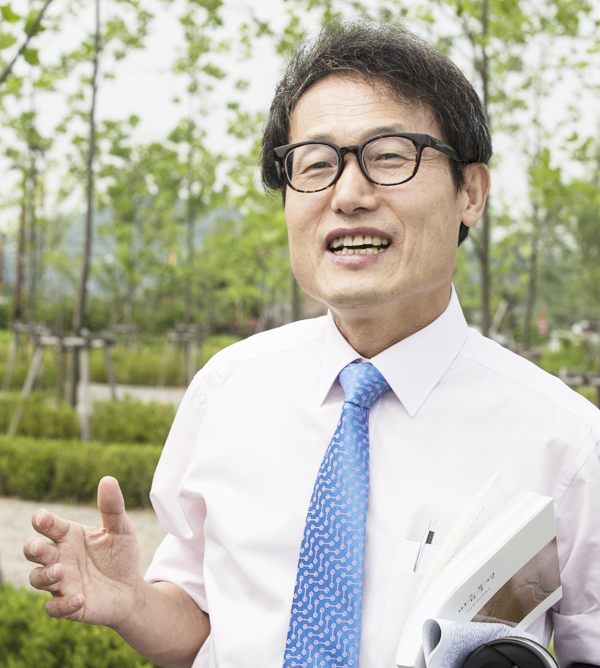 Cho Hi-yeon, Superintendent-elect of the Seoul Metropolitan Office of Education

Throughout a 90-minute interview, newly elected Seoul schools chief Cho Hi-yeon was most defensive when talking about the education of his own children.

That drew plenty of criticism from his opponents in the campaign.

In an interview with the JoongAng Daily Sunday on Saturday, Cho said it doesn’t mean education and society should not change.

Q. You won because of a controversy involving front-runner Koh Seung-duk’s role in the education of his children from his first marriage. You got support of nearly 40 percent from Seoul voters. What is your take on the result?

A. I think people’s desire for change has been expressed. Entering a miserable college entrance exam war to avoid being a “loser” ... deepening inequality in education. It is a request from parents and citizens to change these realities. I think the Sewol ferry tragedy also worked as an opportunity for self-reflection by parents and students. The controversy regarding Koh and my son’s letter [which was revealed in public that showed respect for his father] have been compared and support from regular parents was expressed. But I’m not saying that I’m entirely sound as a father.

Five of your 10 election pledges are related to social equality. It is also well known that you have been researching and doing social activities on this issue. Is inequality in our society really serious?

Korean society is very homogeneous in various aspects such as language, culture and history. This leads to high expectations for equality. Although objective levels of inequality in this country may be lower than in the United States, Koreans’ subjective level of feeling unequal can be severe. Education inequality is a path to replicate social inequality. Education plays a role for sons of the wealthy to live well for generations. At this point, there is dissatisfaction with the education system. Every parent’s hope is, “My children shouldn’t live like this even if I’m not living well.”

Where is the line between liberal and conservative in the problem of equality?

Liberals aim for equal values, but this doesn’t mean conservatives aim for inequality. After all, the difference between liberals and conservatives comes from how much they accept the inevitability of social equality. The line is drawn whether you see today’s social inequality as meaning something to be broken or not. Of course, liberals don’t reject all elite education. They just see that today’s inequality is just too much compared to people’s expectations.

What are you going to do about autonomous high schools?

Twenty-five autonomous high schools in Seoul will be evaluated this year and next year. If the schools are below standards, they will become regular high schools. As superintendent-elect, I already asked the Ministry of Education to add criteria like the effect of education on equality and the impact on community, and revise inspection standards.

What about inequality from special-purpose high schools?

Reforming special-purpose schools wasn’t one of my campaign pledges. I think the three science high schools in Seoul don’t have problem. For six foreign language high schools, some parts are operating without fulfilling their purpose of fostering international talent. I plan to reinforce their management and inspection. All problems can’t be solved at once. I will think more about special-purpose high schools.

You are a renowned sociologist, but not an education expert. Some people criticize your campaign pledges as lacking in detail. Are you confident you can do this job?

My campaign pledges have received 42 out of 50 points from the evaluation conducted by moderate education groups. Candidates like Koh Seung-duk and Moon Yong-rin were in the 30-point range. I admit execution wise, the plan is a little insufficient. I will present detailed plans during the transition process.

Among 17 education superintendent-elects, 13 are liberals. Already, there are talks about an alliance and some people worried about radical changes in education. What are your thoughts?

You are also planning to make 200 “revolutionary schools” that focus more on discussions and nurturing creativity of students, three times more than the current level. It should require lot of financial support. How are you going to prepare the budget?

About 100 million won ($98,300) is needed for each school per year. In the Lee Myung-bak administration, authorities spent billions of won on three Meister high schools [schools that focus on fostering industrial technology talent]. The budget for revolutionary schools was passed by the Seoul Metropolitan Council, but wasn’t executed because Superintendent Moon Yong-rin vetoed it. I will also reduce budgets for projects whose only intention is showing off to people.

Conservatives are worried because you are known as a radical scholar. But some people said your image is becoming moderate.

From my writings, people may have felt radical about me, but in real life my characteristics are different. Professors like Kim Se-kyun and Kim Jin-kyun were classified as liberals, but they had moderate and flexible attitudes and I was affected by them. My real personality is meek and mild, as some people say they never see me get angry. The education problem can’t be divided along the lines of liberal and conservative ideology. I will solve the problem with the empirical tradition in my mind.

What kind of education superintendent do you want to be?

Every existing thing has its reason. I will not think about changing everything suddenly. I will consider the result delicately and make a change. I want to be remembered as a heartwarming superintendent who communed with citizens.