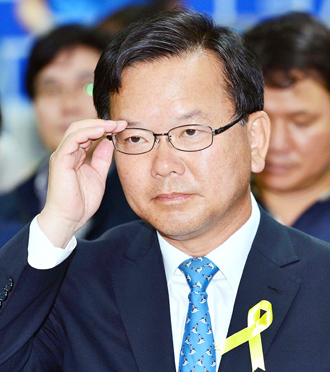 Kim Boo-kyum was once thought of as virtually the only opposition New Politics Alliance for Democracy candidate who could produce a big upset in Daegu’s mayoral race by defeating the ruling Saenuri Party’s Kwon Young-jin.

Public polls prior to the June 4 local election showed Kim neck and neck with Kwon, but Kim was defeated at 55.95 percent to 40.33 percent - a margin not usually considered small.

Yet the fact that Daegu native Kim was able to muster more than 40 percent of the votes in the traditional Saenuri stronghold still came as a surprise to many in the NPAD. The opposition party saw the result as a hopeful sign for breaking through the city’s regionalism in future.

An opposition liberal candidate waging such a close race shocked many, given Daegu’s decades-long loyalty to the conservative bloc, especially to President Park Geun-hye, who represented a district in the city as a lawmaker.

Kim’s 40 percent showing has reinforced the prospect of him running in Daegu again during the 2016 general election. Some speculate that the Seoul National University graduate could become an opposition party presidential hopeful in 2017 if he achieves the feat in the general election, which no one else dares try in the city that favors the Saenuri.

In a phone interview with the JoongAng Ilbo on Monday, Kim made clear his intention of competing again in the conservative city to “overcome the barrier of regionalism.”

Kim defined the outcome of the June 4 local elections, in which the NPAD won nine out of the 17 metropolitan and provincial elections versus eight races secured by the Saenuri, as a “defeat” for his party.

“The opposition needs to face the reality that it failed to win a majority [in 17 races] even after it had Ahn Cheol-soo in command, who is an icon of new politics and a new era,” said the former lawmaker, adding that “this election will be remembered as a defeat for the NPAD.”

The opposition party asked voters to punish the Park Geun-hye government for its botched rescue efforts in the Sewol ferry disaster by casting ballots for the NPAD. But Kim said that strategy did not work at all for him in Daegu.

“Voters in Daegu expressed their outright disapproval at such a campaign tactic. To them, it was not a matter of punishing the government that has governed just over a year at a time of the Sewol sinking,” said the defeated but ambitious politician.

“The NPAD should have appealed to voters by saying it will uproot the misdeeds and corruption accumulated over half a century since this country’s foundation rather than calling for the stern punishment on the Park government,” he explained.

Kim said he will try to break through the regionalism in Daegu again by attempting to represent a district in the city in 2016.

“Moving again to challenge the regionalism two years later will be my homework [as a politician]. I have made such an effort twice so far. It will be my third attempt [in 2016],” Kim said.