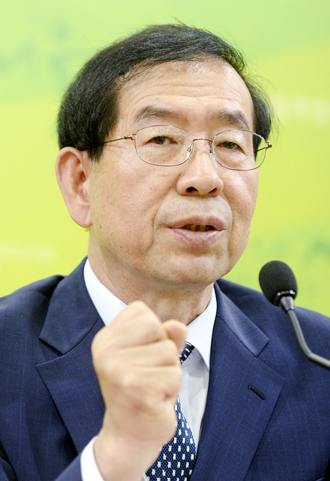 Ever since he won re-election to one of the most powerful positions in Korea - informally considered the No. 2 position of power after the presidency - Seoul Mayor Park Won-soon has been showered with questions about whether he intends to run for the Blue House.

The 58-year-old former human rights lawyer received the highest favorability rating for next president in a survey conducted by the Korea Research Center and Hankook Ilbo.

The survey released on Monday was among a few announced after the June 4 local elections.

Other surveys put Park behind Representative Moon Jae-in of the opposition New Politics Alliance for Democracy, who lost the 2012 presidential election, and Chung Mong-joon of the ruling Saenuri Party.

Park, who won re-election in Seoul by defeating the seven-term lawmaker Chung, dodged questions about any presidential ambitions during a press conference yesterday at City Hall in central Seoul.

To any questions about the topic, he repeated the answer: “I would like to say that I only concern myself with Seoul and its citizens.”

Park did describe initiatives he will start during his second term.

Under the catchphrase “Seoul’s Creative Economy,” Park said he will focus on fulfilling development projects that are underway in different areas.

“Instead of churning out new policies, I will put my effort into successfully carrying out or finishing ongoing development projects based on the plan ‘Economy Vision 2030.’?”

Under his comprehensive development plan, Seoul’s city government will establish IT business complexes and research centers on the city’s most pressing issues, such as its rapidly aging society.

Seoul’s designated business complexes such as Digital Media City (DMC) in Sangam-dong, western Seoul, and the Seoul Digital Industrial Complex (G-Valley), in southwestern Seoul, are among the major beneficiaries of the funds.

While the DMC development is meant to facilitate cooperation between the media and IT industries, G-Valley will serve as a hub for software development, the Seoul Metropolitan Government said in a statement.

A large, untapped area in Gaepo-dong, southern Seoul, which is set to be developed into a multipurpose IT complex by 2016, is also a part of the plan.

“Construction is underway,” said Park yesterday, “but Seoul will now work more aggressively to make progress in the region.”

He also addressed the touchy issue of budgets for welfare programs, which has pitted Seoul city against the central government.

“The central government needs to be more responsible with their promises,” he said.

He has criticized the National Assembly for passing a law that requires the city government to pay 80 percent of the money for free day care programs. 