Nothing says loyalty in North like pens and pads

Nothing says loyalty in North like pens and pads 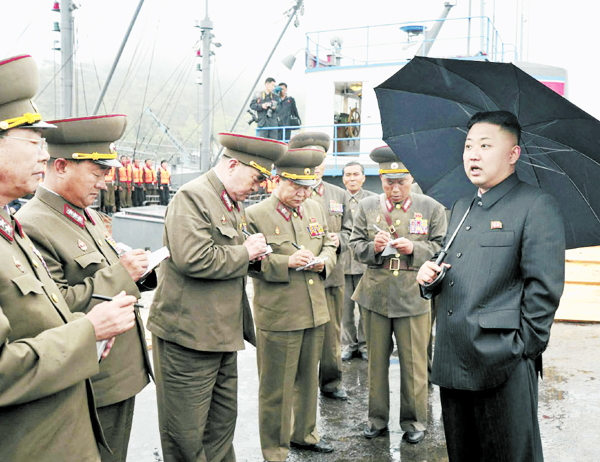 North Korean leader Kim Jong-un, right, under an umbrella, gives directions at a fishery run by the North Korean army on May 28, 2013, while soggy military officials concentrate on writing down his words. [Rodong Sinmun]

The power elite in Pyongyang has come up with a new way to demonstrate their loyalty to North Korean leader Kim Jong-un: writing down every word of the leader in a notebook, even in the pouring rain.

According to a report by the regime’s Korean Central Television in May, when Kim went on one of his so-called field guidance trips, officials of the ruling Workers’ Party and high-ranking generals were holding small notebooks and writing down the remarks of Kim with heads respectfully bowed.

In the report, they were all soaked from heavy rains as they stood near Kim, the only one holding an umbrella. Even following their leader in the rain, the officials didn’t stop taking notes of his words.

Even close aides to Kim Jong-un are showing loyalty through note taking, such as Hwang Pyong-so, the newly appointed director of the General Political Bureau of the North Korean army, who recently replaced Choe Ryong-hae, and Ma Won-chun, director of the Design Department of the National Defense Commission, who is in charge of all the architectural projects in the communist regime. Hwang and Ma were both seen noting down Kim’s comments, according to Korean Central Television.

The only people apparently exempted from note-taking are Ri Sol-ju, Kim’s wife, and Kim Yo-jong, the younger sister of the leader, as seen by their appearances in state media.

The note-taking has even become a clue to some enduring mysteries of who is who in the secretive North.

In 2011, the Wall Street Journal reported on a woman who in her 40s was photographed standing beside late leader Kim Jong-il at Pyongyang Department Store No. 1. The WSJ thought she was Kim Sol-song, a daughter of Kim Jong-il and his second wife Kim Yong-suk, and a half sister to Kim Jong-un.

Following the WSJ report, many local media used the photo of the woman at the department store whenever they mentioned Kim Sol-song.

But on April 5, KCTV officially named her as Kim Mi-ok, director of the ruling party’s public service department, who is in charge of most of the restaurants in Pyongyang. She was also described as a judge of a cooking competition in the capital, according to the KCNA.

Back in 2011, Seoul officials said she seemed to be a manager of the department store. As proof that she was not Kim Sol-song, they noted that she was holding a notebook and a pen in the 2011 photo, which a member of the ruling Kim dynasty would never do.

“A notebook is not a suitable item for Kim Sol-song, as she was allegedly working as a guardian for Kim Jong-un, who was the heir-apparent at the time,” a Seoul official said.

The note-taking, according to North Korean media reports, has become more important in the aftermath of the deadly purge of Kim Jong-un’s powerful uncle Jang Song-thaek last December.

One of the reasons Jang was executed, the official Korean Central News Agency said at the time, was because of obvious arrogance around Kim, such as “insincerely clapping his hands” or not carefully listening to the leader while other officials were writing down his words.