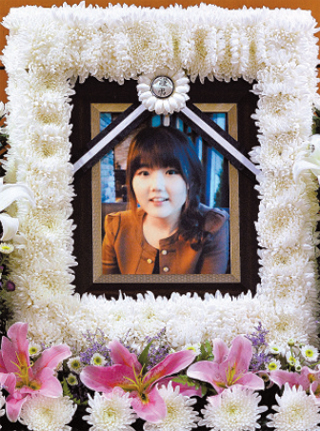 A photo of Yoo Ni-na is displayed on a mourning altar yesterday at Korea University Hospital in Ansan, Gyeonggi. [NEWS1]

At around noon on Sunday, relatives of Yoo Ni-na, a 28-year-old teacher at Danwon High School, stepped into a white tent that serves as a temporary morgue for casualties recovered from the wreck of the Sewol ferry at Paengmok Harbor in Jindo, South Jeolla.

Yoo’s 31-year-old brother recognized the remains of his sister even after 53 days under the waters of the Yellow Sea.

“She’s wearing the ring she bought with her boyfriend,” he said aloud.

Yoo’s mother collapsed to the ground calling out her name. Her father shed tears but looked peaceful after the family’s very long wait to be reunited with their lost daughter.

A few hours earlier, Yoo’s body was retrieved from the third floor of the sunken ferry by divers searching for the remains of missing passengers and crew members.

After retrieving some 260 bodies in the first five weeks following the April 16 accident, divers weren’t able to penetrate certain sections of the wreck in fear of structural collapse and other obstacles. In the past five days, they have managed to get to new areas and find three bodies.

Survivors of the accident say that Yoo was in her cabin on the fifth level when the Sewol started to list on the morning of April 16.

She descended to the fourth floor to tell her 11th-grade students, who were on a class trip to Jeju Island, to put on their life jackets and escape.

Of the 75 students who escaped from the Sewol that day, 19 were from Yoo’s homeroom.

Subsequently, Yoo heard there were more students on the third floor obeying orders from the ship’s crew to remain in their cabins and went down another level to help them get out.

That was the last time survivors saw her.

Yoo’s body was found in the cafeteria on the third level of the ship without a life jacket. It’s not known if she gave her life jacket to one of the students who didn’t get out.

“When the ship was capsizing many of the passengers called [their family members], but she did not,” Yoo’s father said. “I guess she was busy saving students.”

Her parents say Yoo frequently visited them even after she moved to Ansan.

For students, she was a friendly teacher who was passionate about her subject, the Japanese language. To make the lessons more fun, she would put on costume masks of famous sumo wrestlers and bring in Japanese dishes to eat.

Survivors from the accident put up posters in her classroom when they returned home.

“You were like our friend,” read one. “Let’s eat something delicious again.”

Another one read, “Ms. Yoo, I love you and miss you. Come back soon.”

“I’m really thankful to the volunteers and the authorities,” Yoo’s father said after identifying his daughter’s remains. “I hope the remains of other people missing in the Sewol can be returned to their families as soon as possible.”

Later Sunday, divers recovered another body from a fourth-floor cabin near the bow of the sunken ferry. The 292nd victim was Ahn Jung-geun, a 17-year-old Danwon student.

After the remains of Yoo and Ahn were found on Sunday, the number of victims went up to 292.

Twelve people who were on the ship are still missing, six of them Danwon students.