Trial of Sewol crew starts with tears and curses

Trial of Sewol crew starts with tears and curses 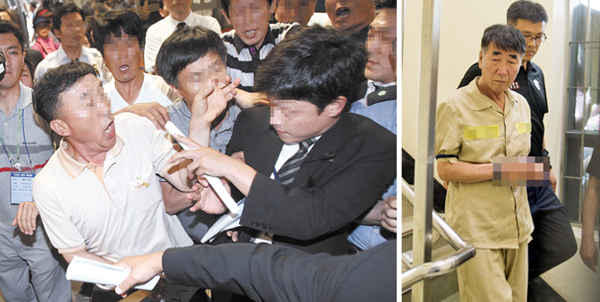 Left: Relatives of Sewol victims struggle with a security officer while attempting to bring placards into the court for the start of the trial of the ferry’s crew members at the Gwangju District Court in Gwangju yesterday. [REUTERS/NEWS1] Right: Lee Jun-seok, the Sewol captain, is taken into the court. [NEWSIS]

The start of a trial of 15 crew members who abandoned the Sewol as it sunk on April 16 turned highly emotional yesterday as relatives of the victims vented their feelings about the indicted men and women.

An opening proceeding at Gwangju District Court began with a statement from a representative of the survivors and the victims’ relatives.

“Some might say that all pain eventually subsides over time, but that’s not the case for us,” said Kim Byung-gwon, the chosen representative, who lost his 17-year-old daughter in the accident that led to 292 deaths. Twelve passengers are still unaccounted for.

“Time has stopped since the disaster. Whenever we see a child in a school uniform, we feel for a moment like our own child has returned to say, ‘Mom I’m here.’”

Kim condemned the alleged negligence of the crew members, who ordered passengers to stay in their cabins while they escaped and the ship capsized and sank.

“If they could have made one announcement telling passengers to escape the ship,” he said, “the sinking would not have resulted in such a massive number of deaths.

“They killed not only our children but also the souls of the bereaved relatives,” he said.

While a prosecutor read the charges against the defendants, some family members cursed at the crew members. One of the terms of abuse used was, ‘Murderer.’

A judge was forced to halt the hearing and order the relatives to calm down. Some relatives sat with expressions of sorrow and hopelessness.

“I just watched the trial because no matter how much I swear or curse them, my son will never return,” said Chung Hye-sook, a 46-year-old who lost her 17-year-old son Park Seong-ho that day. “But I will keep watching the trial to make sure they are held accountable for what they’ve done.”

About 90 relatives were in the court in Gwangju, which has legal jurisdiction for the location of the accident. They traveled to Gwangju on three buses.

The defendants have had trouble finding legal counsel. One lawyer took the captain’s case and then walked away from it. The government arranged a public defender for the 69-year-old captain. A total of six public defenders have been appointed for the 14 defendants while one managed to hire a private attorney.

The legal representative for Lee said that the homicide charge is heavier than what it should be, stating that there was no willful negligence or intention by him. “He did as much as he could when the ship was dangerously listing and there were not many things that he could do,” the lawyer said.

The main focus in the trial is expected to be whether the four senior crew members are convicted of manslaughter. In May, the four were charged with manslaughter by omission for deliberately evading their responsibility and allowing otherwise avoidable deaths.

One can be liable for this crime when the fault lies in a failure to foresee, and when the occurence of otherwise avoidable dangers is allowed by a defendant responsible for preventing such dangers. If convicted, the four can be punished with the death penalty. Korea’s last execution took place in 1997. Prosecutors will have to prove that the four could have afforded to save passengers but deliberately abandoned their responsibilities. Of a total crew of 29, nine died in the accident and 20 survived.