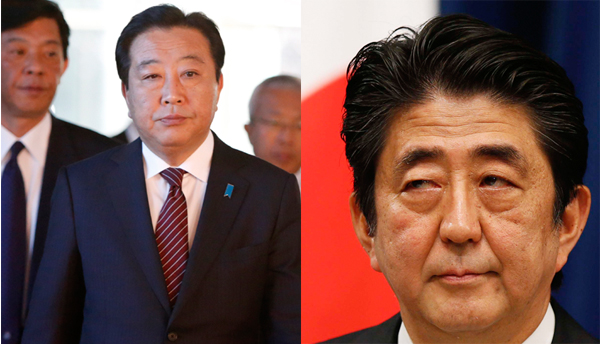 Sour grapes are in season in Tokyo as Shinzo Abe’s predecessor steps up and slams the prime minister’s tax plans.

But beneath the bad feelings and twinge of regret, Yoshihiko Noda makes a very timely point when he accuses Abe of buying into Ronald Reagan’s debunked theories on trickle-down prosperity. “It’s a kind of voodoo economics,” Noda said of the “Abenomics” program that has thrust Japan back into the global spotlight.

Noda made those comments, which are sure to irk Abe’s team, to my Bloomberg colleagues Chikako Mogi and Kyoko Shimodoi. The immediate context is Japan’s sales tax, which Noda’s short-lived 2011-12 government agreed to raise in two steps to contain the world’s highest debt burden. In April, Abe’s government went ahead with the first hike to 8 percent, but there are questions about the second move to 10 percent next year. If the hike doesn’t take place, Noda warned, that “would imply that Japan’s fiscal management strategy will collapse, and the market perception risks are huge.”

But far more interesting is Noda’s critique of Abe’s corporate-tax plan. Yes, the nearly 36 percent levy is among the highest in the world and bringing it down could make Japan a more attractive investment destination. But, as Noda asks, won’t lowering corporate taxes make higher consumption taxes a wash? Absolutely, and the folks at Moody’s and Standard & Poor’s won’t be fooled by this fiscal bait-and-switch.

The bigger question is Abe’s faith in the Reagan-era ideology of lowering corporate taxes and reducing levies on profits in order to boost growth, tax revenue and, by extension, living standards. In November 2012, Tokyo unleashed one of modern history’s greatest gestures of corporate welfare, driving the yen down 20 percent. Nineteen months on, have companies shared the wealth? Nope.

The money’s there; Japan Inc. is sitting on record piles of cash. At of the end of 2013, private companies, excluding financial ones, were sitting on at least $2.2 trillion. That sum dwarfs U.S. corporate cashholdings, which is quite a feat considering America’s annual output is 2.7 times greater than Japan’s. With that kind of money, corporate Japan could pool its spoils to buy Russia and settle most of its energy needs. Given that any wage increases so far in 2014 have been negligible, that cache has surely grown.

It’s hard to argue, then, that current corporate tax rates are hurting Japanese companies. Nor are taxes the main impediment for many foreign companies that might covet the Japanese market (America’s rate is higher). The problem is an aging population, low productivity, disappointing returns on investments, an expensive and rigid work force, immigration policies than ensure little diversity of opinion among managers and a general lack of innovation from the ground up.

Rather than cater to the likes of Sony and Toyota, why not go the other way and empower start-ups? How about this for a tax reform: If you put out a shingle in Tokyo, Osaka or Fukuoka today, hire some people and meet certain metrics for growth, you pay no taxes for five years. That way, wealth trickles up instead of down.

The policies of former U.S. leaders Reagan and George W. Bush showed companies are more apt to use tax breaks to enrich executives and shareholders than workers. Yacht makers and Rolex merchants are happy, while the average Joe - or Mrs. Watanabe - slides backward.

The magnitude of Abe’s restructuring task is a daunting one and no magic wands exist to deregulate industry, improve corporate governance and cultivate entrepreneurship. Why, then, does Abe think he can get the job done using voodoo?