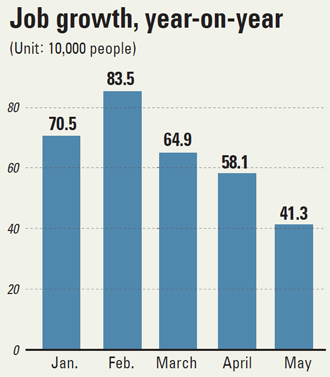 The economic impact of the Sewol ferry disaster has affected the nation’s job market, according to a report released by Statistics Korea yesterday.

The number of people who were newly employed in May was up 413,000 compared to the same month last year, but the report showed slowing growth over the past three months.

Year-on-year job growth hit 705,000 in January and 835,000 in February, an improvement that the government attributed to its efforts to raise the national employment rate to 70 percent.

However, the figure has been declining since March. Compared to April, the number of newly employed fell by 186,000 last month.

The Ministry of Strategy and Finance said job growth was affected by the hard-hit service sector after the sinking of the Sewol ferry on April 16. Sales in the tourism, leisure, food and accommodation industries plunged significantly, which directly affected employment.

The number of new workers in the service industry grew by more than 500,000 each month this year but dropped to 327,000 in May.

Meanwhile, job growth continued in the manufacturing sector for the 23rd consecutive month.

The number of people who lost their job rose by 154,000 year-on-year, driving the unemployment rate to 3.6 percent, up 0.6 percentage point from a year earlier.