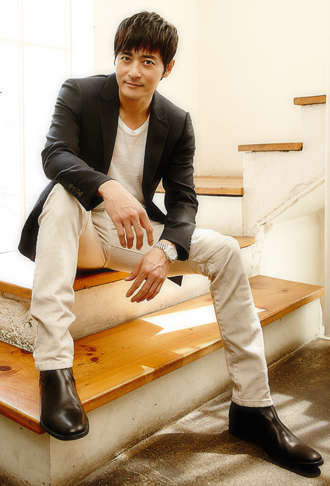 Jang Dong-gun’s latest noir film “No Tears for the Dead” debuted at No. 5 in the local box office last weekend, but many filmgoers have commented on its striking resemblance to the 2010 thriller “A Man from Nowhere.”

But Jang, a 42-year-old veteran actor, asserts that his film has a “totally different style,” though both movies were directed by Lee Jeong-beom.

In the 116-minute story, Jang plays a killer named Gon who is traumatized because his mother left him when he was a child. When he accidentally kills a young girl, his boss forces him to murder her mother, Mo-gyung (Kim Min-hee), as well.

To mark the release of Jang’s first new film in three years, the JoongAng Ilbo sat down with the actor to talk about his 20 years of experience in the film industry.

Q. Many people are comparing your latest work to actor Won Bin’s 2010 thriller “A Man from Nowhere.” What do you think about that?

A. Well, the two stories definitely share similar sentiments, but you can still note the difference between them. While Won Bin’s 2010 story focuses on the dynamic action throughout the film, my latest movie deals with how an individual redeems himself after going through so many tragic events in his life. My character in “No Tears” is more desperate than Won’s role.

Some people say it seems like you are following the path of Won Bin, who debuted far later than you. Do you agree?

I don’t think it’s necessary to think about those things as long as the story is appealing.

“No Tears” revolves around action, so viewers can’t check out how good an actor you are.

I don’t choose to join a film in order to prove my acting skills. I just trusted the director, who has established his own identity in the noir film genre over the decade.

What are Gon’s true feelings toward Mo-gyung?

One of the most important themes that penetrates the story is motherhood. That’s why the director used the name Mo-kyung [“Mo” means mother in Chinese character]. Gon, who was abandoned by his own mother when he was a young kid, never believed in maternal love, but as he falls for Mo-gyung something inside of him changes. I think the feeling is greater than just a typical romance between a man and a woman.

Your filmography is filled with a lot of action films. Why is that?

I don’t necessarily concentrate on doing action films, but I just think I like macho films, like Al Pacino’s “The Godfather” series [1972 to 1990]. Robert De Niro’s “Once Upon a Time in America” was my favorite story while I was growing up.

Is there a type of movie you want to take part in?

I’ve been reading a cartoon adaptation of the Annals of the Joseon Dynasty, the royal records of the Joseon era [1392-1910], so I’ve been thinking of combining historical facts and noir.

What kind of actor do you want to be remembered as?

James Dean once said, “To grasp the full significance of life is the actor’s duty; to interpret it his problem; and to express it his dedication.” Just like Dean, I want to be someone who can have some positive influence.