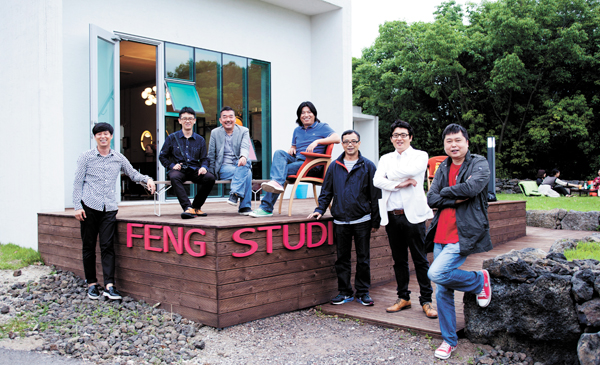 Chinese artists and art industry personnel visit Feng Studio in Jeoji Art Village on Jeju Island. The studio of Feng Zhengjie (center), is one of 28 located in the artist community. By Jeon Ho-sung

Jeoji Art Village on Jeju Island is where artists from all genres come together to rest, play and work. It’s a place born from the labor of Shin Chul-ju, a former governor of northern Jeju in the 90s.

Shin readied the region to be picturesque for the artists that he hoped would move there one day. Today, the village doesn’t have a single telephone pole in sight or any wires that run above ground. Instead, trees line the streets and there is a forest as far as the eye can see.

On April 19, Kim Chang-yeol, better known as the “Waterdrop Artist” also held a ground-breaking ceremony in the art village for his new gallery.

Last year, the fact that Feng Zhengjie, a Chinese artist, also took up residence in the village near the Jeju Museum of Contemporary Art garnered a lot of attention. Feng’s presence marks a first for an international artist. 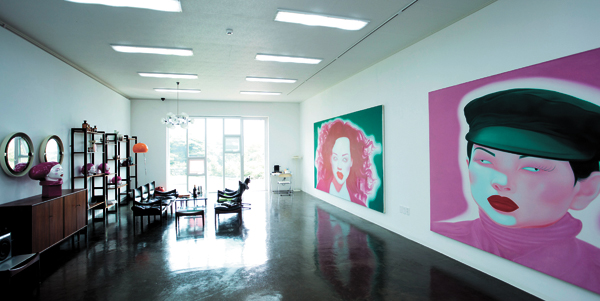 Feng Studio is decorated in the artist’s trademark colors: pink and green. This is Feng’s fourth studio and his smallest, too.

An expert on Chinese-Korean art relations and a friend of Feng’s, Park Chul-Hee, established Feng Studio in Jeju.

He visited the island some 180 times over three years. For now, the island is his permanent address.

It’s been a dream of Park’s to make the island famous for its art. Because of the spotlight Asia is getting of late, he hopes that the island, which is close to China, Korea and Japan, can become a sort of art hub like Hong Kong and Singapore.

Meanwhile, Feng has studios in Beijing, Sichuan province, Singapore, and now Jeju. His space, occupying 2,486 square feet - on 7,104 square feet of land - is the smallest of his ateliers. Size doesn’t make it any less special, though.

Inside there are vintage chairs, contributed by Yim Sang-bong, a famous collector. The green and pink decor - trademark colors Feng is known for - leaps off the walls.

In April, Feng Studio in Jeju received some very distinguished guests: artist Wu Mingzhong of the “Human made of Glass” series, Jin Yan, director of the Blue Roof Art Museum Chengdu in Sichuan, and other industry insiders from China.

Here are excerpts from interviews with Feng, Park and Jin at the studio. 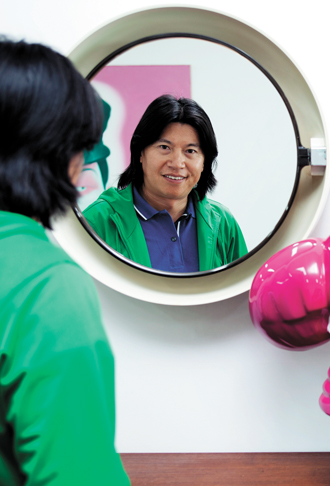 
At his studio, with a cigar in his mouth - a gift from a Cuban friend - Feng was the picture of happiness.

Q.What have you been up to?

A. From April 23, my work, along with my sibling’s, has been on display in Xian [China]. I’ve also finished up the art film ‘Feng Zhengjie is Feng Zhengjie” with director Min Byung-hoon. They will edit it until fall and then it’ll be on its way to film fests. But for now, being back in Jeju feels like home.

You’ve brought some friends with you.

After news broke that I opened a studio in Jeju last year, so many wanted to come visit- Wu Mingzhong is one of them. In Chengdu they are doing similar things, trying to make an artist community, so I think that’s why so many want to visit Jeoji. Wu, in particular, loved the tea fields.

The natural landscape is beautiful and the air is clean. I’ve been playing golf from the break of dawn today. The fact that there are so many museums and art galleries was also surprising. The food is great, too

Do you draw inspiration from Korean culture?

Of course. For example, Dol Hareubang [the mushroom-like statues native to Jeju]. I think it will have a big influence on my work. 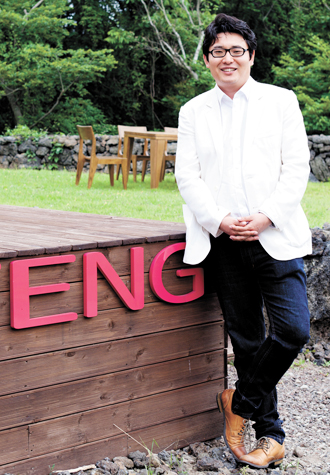 
Park, the president of Gallery Mun in Beijing, studied calligraphy before he took up his doctorate in China in 2000. Around the same time as he started working part-time at an art auction house, he got to know hotshots such as Zeng Fanzhi, Zhang Xiaogang, Fang Lijun and Yue Minjun. In May, Park formed an association for the management of Asian art.

Q. What’s the Chinese art market like these days?

A. It’s still in recovery mode. Traditional paintings and blue-chip artists are getting all the attention. All across China, art galleries are booming. To exaggerate, every two days a new gallery opens. Chinese artists are also over the gallery scene and want to showcase their work at an art museum. It’s sort of a trend.

Why are there so many galleries opening?

The attention that moved from politics to the economy is now going back to art. Museums and galleries in Shanghai are in fierce competition to compile the biggest collection. One art museum purchased more than 500 billion won ($491 million) worth of art works in a year, a fact they boast about.

Is there a way Korea can benefit from this shift?

It won’t be easy. There are hardly any information booklets on artists, not in Chinese and even less so in English. There isn’t a lot of auction information to go by either.

If you go to somewhere like Christie’s in Hong Kong, you’ll find that Feng Zhengjie’s work sells for about tenfold more than Baek Nam-june’s. Some question if that’s just froth, but that’s just how the market works. They say that art is the flower of the culture industry, but Korea has no idea as of yet how the global art market works and thus has no strategy in place.

Korean artists often say that they are rated lower than artists from Southeast Asia. If Hong Kong Christie’s can be thought of as the Asian Games, then we are getting disqualified each time at the preliminaries.

What kind of effect do art zones have on the industry?

The power an artist yields is tremendous. Take the world-class art site Beijing 798 Art Zone as an example. At first it started off with a few artists with studios there. In the art industry you need four components: collector, dealer, artist and curator. In the beginning you need artists to get together. As international artists from China flock to Jeju, others from India, Singapore and Korea, too, will follow suit and synergy will be born. Then curators will come, followed by pictures and collectors. It all begins with the artist, though, then the art industry burgeons.

In the same way, it was money from abroad that fuelled 798’s growth. I see this process as being similar to a blood transfusion. Once fresh blood is injected, there is room for rebirth. And as the blood makes its way around, everyone can live.

You have a lot of close Chinese artist friends

Chinese artists often introduce one another to collectors, calling each other “good artists.” They are also good with sharing information and growing together. But we [Korean artists] don’t even say hello to one another. There is such a difference in culture. Within such bounds, I’m trying to do the best. 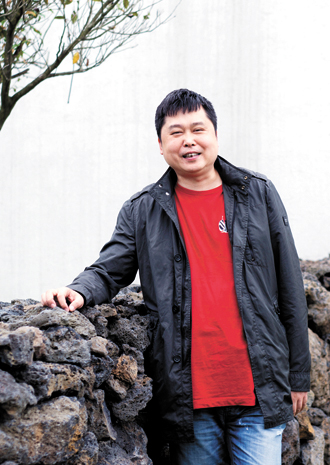 The top curator of Blue Roof Art Museum in Chengdu started his talk with accolades for Feng. Jin said that Feng spends hundreds of million won on scholarship funds for newcomer artists from Sichuan, the province Feng hails from.

Q. What is the Blue Roof Art Museum like?

A. In the southwest region of China it’s the biggest private art gallery. It’s also located in the mecca of contemporary Chinese art. Famous artists like Zhang Xiaogang, Chun Ya, Feng Zhengjie are all from the region. Chengdu, of course, in its own right boasts a rich history as one of the most significant cities in southwest China.

We heard there’s a lot of interest in Jeju Island among the Chinese?

The air is great and there’s no dust, and there are all the conveniences and comfort. Also, in Hong Kong you can only stay a week, but Jeju is somewhere you can stay without a visa and is faster to get to than some parts of China. Even on the streets you can get by with Chinese.

What’s the reason for this visit?

It’d be great from Chengdu’s point of view to have diplomatic exchanges with Jeju. I even talked to director Kim Hyun-sook from the Jeju Museum of Art about fostering long-term and tangible exchanges. Accordingly, the Sichuan Fine Arts Institute will hold a cultural exchange forum.

Korean representative Kim Yoon-sub from The Korean Arts Management Institute will attend. Rather than a dialogue between experts, the forum is set to tackle how ordinary people can relate to art.

What is on the agenda at the forum?

There are three aspects. First we’ll talk about exhibitions. Second, exchange programs for artists. And thirdly, public relations for the city of Chengdu and its culture will be discussed.

What is most crucial as the head of an art museum?

I’m concerned with how the museum is able to contribute to society, in addition to how to popularize art. I look for ways to get more people to seek out an art gallery.