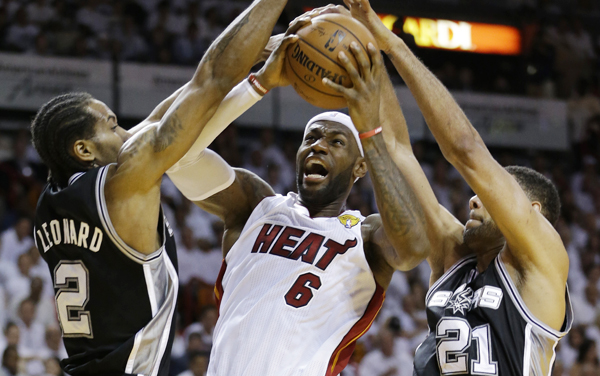 Kawhi Leonard and San Antonio Spurs shot their way into history - and back into the lead in the NBA finals.

Leonard scored a career-high 29 points, and the Spurs made a finals-record 75.8 percent of their shots in the first half in a 111-92 victory over the Miami Heat on Tuesday night that gave them a 2-1 lead.

The Spurs made 19 of their first 21 shots and finished 25 of 33 in the first half, bettering the 75 percent shooting by Orlando against the Lakers in the 2009 finals.

“I don’t think we’ll ever shoot 76 percent in a half ever again,” Spurs Coach Gregg Popovich said.

The Spurs led by as much as 25 and were only briefly challenged in their second lopsided victory in the series.

Unlike Game 1, when they didn’t pull away until the final minutes, the Spurs were up big before halftime in this one.

Returning to the arena where they were oh-so-close to winning a fifth championship last year, the Spurs came out playing like they were trying to build a lead that was impossible to blow.

Leonard scored only 18 points in the first two games and looked frustrated while getting into foul trouble trying to defend James in Game 2. But he had his outside shot working early and the effect on the Spurs’ offense was obvious. He made his first six shots and finished 10 of 13 from the field.

LeBron James and Dwyane Wade each had 22 points for the Heat, who host Game 4 on Thursday.

The past three NBA seasons ended in this building, the past two followed by Heat championship parades.

The Spurs nearly canceled the last one, building a five-point lead in the final half-minute of regulation of Game 6, a title seeming so certain that workers were already making preparations around the court.

But the Heat rallied to win in overtime and took Game 7, leaving the Spurs with a summer to think about the one that got away.

They’re in good shape to get another chance.

When the league scrapping the 2-3-2 format for the NBA finals - in which the lower seed played three consecutive home games - the Spurs could have a chance to wrap it up in San Antonio on Sunday in Game 5 if they can win Thursday.

Chris Bosh took only four shots and scored nine points for the Heat, who for the second straight year will have to overcome a 2-1 finals deficit after being blown out in Game 3.

This rout came on their home floor, where they were 8-0 this postseason and won a franchise-record 11 in a row since the Spurs won Game 1 last year.

Manu Ginobili scored 11 for the Spurs, who dropped Game 2 thanks to some mistakes down the stretch, then rebounded with a level of ruthless execution that had never been seen before.