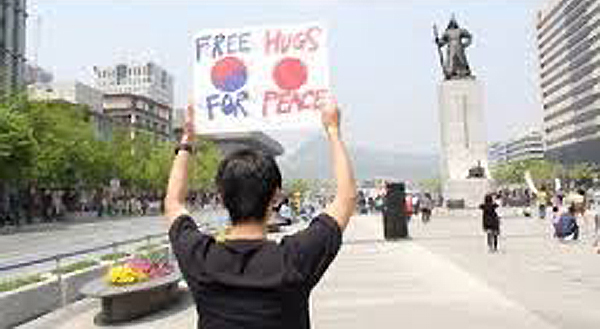 One of the things I don’t get is the free hug. The boom has passed, but we used to frequently see people holding a sign offering free hugs in downtown Seoul. While it began as a movement to heal loneliness and share a common bond through hugs, I doubted whether a sense of fellowship could arise so easily.

But when a Japanese friend shared a link on Facebook last week, I was touched. It was a video titled “I am a Japanese guy and I took the free hugs campaign in Korea.” Koichi Kuwabara offered free hugs in 2011 and 2013. In the video, the young man is holding up a picture of Korean and Japanese flags and a sign: “Free Hugs for Peace,” and goes around busy streets of Seoul. “People say we don’t like each other because of the history between us. But I knew we’re calling for peace.”

At first, people passed by indifferently, but soon, a young man approaches and has an awkward hug. Then a young girl runs up and hugs him. A student dashes toward him and gives him a big hug as if they are old friends. Kuwabara hugs Samulnori performers preparing at a stage at Gwanghwamun Square and also a police officer. An old man taps his shoulders and appreciates his courage.

The video is garnering attention again as the Korea-Japan relationship worsens. In a joint survey conducted by newspapers in Korea and Japan, 73 percent of Japanese respondents and 83 percent of Koreans said that they don’t trust the other country. The percentage of Japanese who said they trust Korea is at its lowest since the survey was first conducted in 1995. Koreans’ trust of Japan is the lowest in seven years. It is hard for me to trust someone who doesn’t already trust me. The bilateral relations seem to have been trapped in this same vicious cycle of distrust.

But there is hope in the fact that 90 percent of Koreans and 83 percent of the Japanese recognize the need to improve the relations. As the political discord isn’t showing signs of a resolution, the young man’s attempt at understanding each other through hugs is meaningful. Earlier this year, he visited Korea for his third free hug campaign, and the latest video will be released on YouTube soon. A hug with a stranger may not immediately create a strong bond, but every little belief we share as we put our arms around each other can become a meaningful beginning for trust that will bolster the Korea-Japan relationship whenever it is shaken by controversial issues.