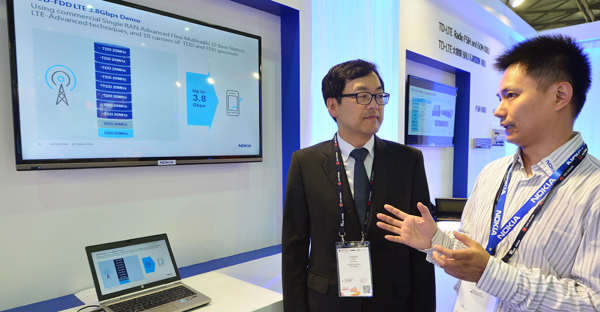 The nation’s No. 1 mobile carrier SK Telecom said yesterday it demonstrated its fastest data transmitting speed of 3.8-gigabit per second (Gbps) on a wireless network with global communications company Nokia at the Mobile Asia Expo (MAE) in Shanghai.

The successful test makes SK Telecom and Nokia the first to show a data speed of more than three gigabit on an LTE-advanced wireless network, according to SKT.

The data transfer speed of 450 megabytes per second (Mbps) successfully tested by SK Telecom at the Mobile World Congress in February on a 3-band LTE-A network was the previous fastest speed displayed by a Korean mobile carrier, the company said.

By using the LTE-A network in a lab environment at MAE, SK Telecom and Nokia were able to achieve the new record transmitting speed, which is about eight times faster than the 450 Mbps record. Compared with normal LTE, 450 Mbps LTE-A is six times faster.

Both companies said that showing the high download speed is important because it could become a foundation for gigabit high-speed data services. However, they said it may not be commercialized in the near future due to a lack of available frequencies.

Gigabit data services are expected to become a key business area in the future of 5G, along with a variety of frequency bands, SKT said.

SKT is planning to develop its gigabit network to improve 5G technologies, starting with the 3.8 Gbps transmitting speed demonstration at MAE.

“Since we succeeded in demonstrating 3.8 Gbps data transfer with Nokia, we reached a new milestone in our efforts for the evolution of next-generation network technology,” said Choi Jin-sung, ICT technical director at SK Telecom.

“SK Telecom will continue to lead the evolution of next-generation networks beyond LTE-A through 5G.”

“By breaking the record for the next-generation wireless network data transfer speed with SK Telecom, we were able to prove Nokia’s advanced technology in the field of LTE,” said Zhang Qi, vice president of TD-LTE at Nokia. “To help the mobile carrier provide the world’s best data service to its customers, we will continue to cooperate on developing new technologies.”