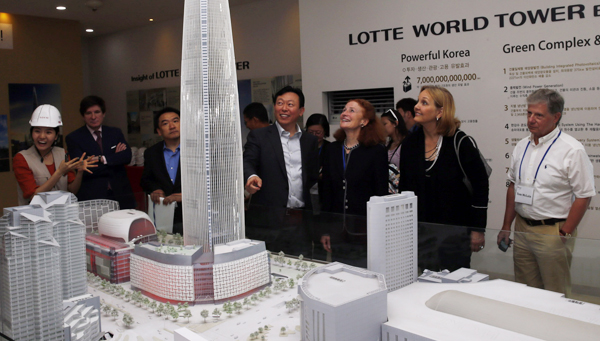 Lotte Group Chairman Shin Dong-bin explains the features of the second Lotte World to Asia Society board members yesterday at the construction site in Jamsil, southern Seoul. Next to Shin is Henrietta Fore, society co-chairman, and Josette Sheeran, society president. Provided by the company

Lotte Group Chairman Shin Dong-bin rolled up his sleeves yesterday to show off the conglomerate’s new commercial complex under construction in Jamsil, southern Seoul, to foreign guests for the first time.

According to Lotte Group, Chairman Shin invited board members of the Asia Society, a nonprofit organization founded in 1956 to boost exchanges between the United States and Asian countries, to visit the construction site of the second Lotte World, including the 123-floor Lotte World Tower. Shin explained about the facilities and future operating plans. In particular, the members were invited to have a look around Asia’s largest movie theater, which is scheduled to open in the new complex, and watch a video introducing hallyu, or Korean Wave. They also experienced the theater’s 4-D experience, the conglomerate said.

About 40 members from the Asia Society attended, including Henrietta Fore, society co-chairman and former administrator of the U.S. Agency for International Development; Ronnie Chan, chairman of Hang Lung Group; and Josette Sheeran, society president and former vice chairwoman of the World Economic Forum. Shin is chairman of the Asia Society Korea Center, one of 11 centers in the Asia-Pacific region. The headquarters of the organization, which was founded by John D. Rockefeller III, is in New York.

“It is the first time that we have unveiled the inside of the [second Lotte World] complex to foreign guests,” said an official of Lotte Group.

The visit is part of the board members’ three-day visit to Seoul to attend the 2014 Asia Society board meeting. They visited the demilitarized zone and Changdeok Palace after arriving on Tuesday.

Shin, meanwhile, is known to have special affection for the second Lotte World with its 555-meter (1,821-foot) tower building and three low-rise complexes with department stores, a shopping mall and entertainment. While the high-rise building is still under construction, the conglomerate said the three complexes have been completed.

On Monday, Lotte Group submitted a document to Seoul city government requesting an earlier opening of the complexes. The conglomerate aims to finish construction on the second Lotte World in 2016.

“As for the official opening [of the three complexes], we are waiting for an approval by the Seoul city government,” the conglomerate official said. “We haven’t heard anything from them yet.”

The Seoul city government is known to be cautious about giving a green light to Lotte following several accidents - small and large - that have happened at the construction site.

In April, a worker was killed on the 12th floor of the site when he was hit on the head by a piece of metal that popped out while he was testing the pressure of a pipe.

After the accidents and subsequent concerns that arose over safety management, Shin visited the construction site earlier last month.