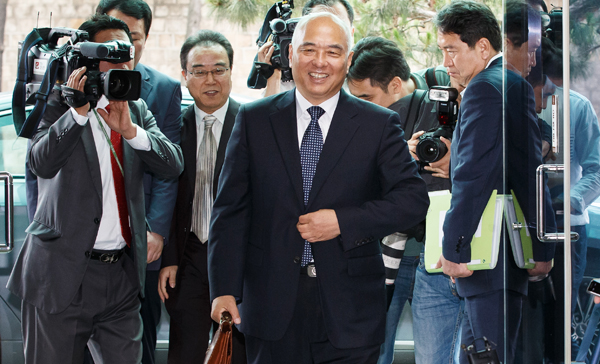 Prime Minister nominee Moon Chang-keuk walks into his temporary office at the government complex in Gwanghwamun, central Seoul yesterday, his first day on the job. [NEWS1]

Moon Chang-keuk, the former editor- in-chief of the JoongAng Ilbo who was nominated as prime minister on Tuesday, began work yesterday at an office reserved for a prime ministerial candidate at the government complex in Gwanghwamun, central Seoul.

The nominee to replace Chung Hong-woon, who tendered his resignation to take responsibility for the mishandling of the Sewol ferry disaster 13 days after the accident, is set to spend the coming weeks preparing for a confirmation hearing likely to be held soon after June 21, when President Park Geun-hye will return from a six-day trip to Central Asia.

The Prime Minister’s Office will also finalize drawing up documents related to the nomination that require the president’s authorization by tomorrow, two days before the president leaves the country.

When a host of reporters swarmed to the office yesterday to ask his thoughts and resolutions, Moon was curt but quote-worthy.

It is unlikely that the 66-year-old ex-journalist is unaware of the criticism the president has attracted for holding onto too much power and for caring about too many details of governance.

The main opposition New Politics Alliance for Democracy (NPAD) has also been talking about the need for a “responsibility-centered prime minister.”

The president’s plan to give more power to the prime minister was part of a major reshuffle that is supposed to show her resolve to clean up corrupt practices in the government in the wake of the tragic sinking of the Sewol ferry off the southwestern coast that killed nearly 300.

Moon’s suggestive remark may reflect a view that the prime minister’s role is inevitably limited in the Korean system, which is centered around the president, people familiar with him say.Should the speculation turn out to be correct, the prospect of Korea seeing a more powerful prime minister may become moot.

He issued a press release later in the day in which he said what he meant was the term “responsibility-centered prime minister” is not stipulated in the Constitution.

The first former journalist to be nominated for the nation’s second highest-post refrained from answering questions. One was whether he thought the fact that he served last year as a board member of the Park Chung Hee Commemoration Foundation, which was led by Presidential Chief of Staff Kim Ki-choon, affected his nomination. He was also asked what he thought of opposition parties criticizing him for writing right-wing commentaries while at the JoongAng Ilbo.

“His way of thinking is absolutely opposite from being new and he will find it difficult to avoid criticism that he is too biased,” said Kim Han-gill, head of the opposition party.

The Blue House was battered for its earlier nomination of Ahn Dae-hee, a former Supreme Court justice who had to drop his candidacy after a public uproar over a sizable fortune he earned while practicing as a lawyer after retirement.