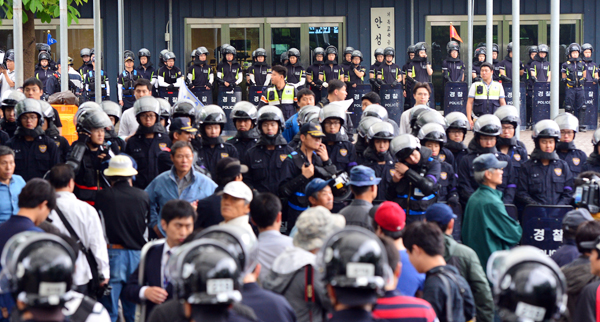 Police officers yesterday cordon off followers of the Evangelical Baptist Church in front of the chapel inside Geumsuwon, the retreat for the religious sect, in Anseong, Gyeonggi. The joint forces of the prosecution and the police raided Geumsuwon to search for key aides to Yoo Byung-eun, the leader of the sect, who is on the run. [NEWS1]

The move came a day after President Park Geun-hye chastened investigators for failing to locate Yoo Byung-eun, the 73-year-old patriarch of the family that owns the operator of the ferry that sank on April 16, killing 292 and leaving 12 unaccounted for.

More than 4,000 police officers entered Geumsuwon, the headquarters of the Evangelical Baptist Church, better known as the Salvation Sect, in Anseong, Gyeonggi. Yoo co-founded the church with his father-in-law in 1962.

Helicopters, ambulances and water cannons were dispatched in case of any emergencies or physical clashes, though no serious clashes took place.

Three weeks have passed since the joint forces embarked on a nationwide pursuit for Yoo and his elder son Yoo Dae-gyun.

Among the six arrested men, four were on the wanted list for aiding a criminal suspect while one was apprehended for questioning.

The sixth was arrested for obstructing police in the exercise of their duties.

However, the search team failed to find two key female aides who are believed to have played a major role in keeping Yoo out of grasp of the authorities.

But it confiscated a card used to pay highway tolls and an ID card from one of them, a 59-year-old woman surnamed Kim.

The other suspect is a 64-year-old woman whose surname is Shin.

Prosecutors allege that the two followers raised funds and ordered other adherents to provide shelters for Yoo’s escape.

There were no major clashes yesterday, but a representative of the sect criticized the raid.

“Police were already inside Geumsuwon even before they presented their warrants,” said Lee Tae-jong. “This can fall into the category of unlawful entry. And they searched Geumsuwon at their will without us accompanying them.”

A series of failed attempts to capture Yoo prompted President Park to express concern at a cabinet meeting on Tuesday.

“I know the prosecution and the police are trying hard to apprehend Yoo,” said Park, “but it doesn’t make sense they could not catch him after all this time.”

The president went so far as to say that the authorities “should review their way of pursuing Yoo and check whether there might be other means so that they can ensure that Yoo is brought to justice.”

This is the second time the authorities raided the religious compound. A team of prosecutors and police forced its way into Geumsuwon to arrest Yoo and his eldest son Dae-gyun on May 21 but came away empty-handed.

Prosecutors allege that the patriarch has been involved in different financial irregularities such as tax evasion and embezzlement. They also think that Yoo is covering up unfair or risky business practices such as excessive overloading that compromised the Sewol and led to the tragedy.

The investigation into the disaster involves different parties including the crew of the ship, high-ranking officials of Chonghaejin, safety inspectors and the family behind the beleaguered operator.

Yoo’s family has evaded arrest, but Yoo’s daughter Som-na was arrested in France. His second son Hyeok-gi is presumed to live in the United States.

The prosecution last month raised the rewards for the tips on Yoo and his eldest son’s whereabouts to 500 million won ($492,000) and 100 million won.