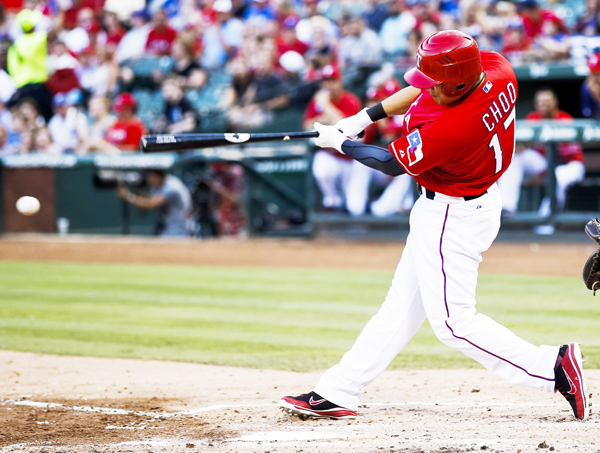 Rangers designated hitter Choo Shin-soo connects for a three-run double against the Miami Marlins in the bottom of the third inning on Wednesday local time at Globe Life Park in Arlington, Texas. [USA TODAY/NEWS1]

Choo Shin-soo finally broke out of a terrible slump with two hits and four RBIs to lead the Rangers to a 6-0 victory over the Miami Marlins.

Ryu Hyun-jin’s day wasn’t nearly so good. The Los Angeles Dodgers lefty allowed four runs in six innings against the Cincinnati Reds, as he struggled with a rookie umpire’s tight strike zone and his teammates struggled to score runs.

In the Wednesday game at Globe Life Park in Texas, Choo, who was hitting .037 (1 for 27) in his last eight games, started as DH hitting third in Manager Ron Washington’s lineup. In his first at bat, he flied out to center field.

With the bases loaded with Rangers and one out in the third inning, though, Choo ended his hitless streak in a big way by doubling home three runs. 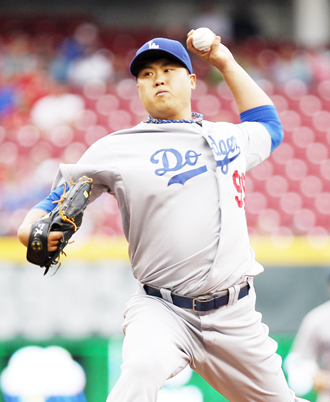 Dodgers starter Ryu Hyun-jin delivers a pitch in the first inning on Wednesday local time against the Cincinnati Reds in Ohio. [USA TODAY/NEWS1]

He smashed Marlins starter Jacob Turner’s second-pitch fastball into right field past the Marlins’ Giancarlo Stanton and all the way to the wall, easily scoring Elvis Andrus from first for a 3-0 lead.

“All I needed was one good hard hit,” said Choo. “I’m happy for the team’s win and ending the slump.”

The third-inning double was his first extra-base hit since June 1 against the Washington Nationals, and he had not had four RBIs in a game since April 27, 2011, against Kansas City.

While Choo was red hot, Rangers ace Yu Darvish was dominant on the mound, shutting out the Marlins in the first complete game of his Major League Baseball career. Darvish had come close to complete games twice before, against the Houston Astros last season and the Boston Red Sox a month ago.

Prior to Wednesday at Great American Ball Park in Cincinnati, Ryu had been rock solid away from home with an ERA of 0.95. Today, his road ERA stands at 1.64 after allowing four runs in six innings on six hits, including a solo home run, and two walks while striking out five.

His first crisis came in the second inning when Brandon Phillips and Jay Bruce singled with none out. But second baseman Dee Gordon caught up with a short fly to right field by Brayan Pena and doubled Phillips off second base.

In the next inning, Ryu couldn’t overcome home plate umpire Seth Buckminster’s strike zone. After retiring two hitters on only eight pitches, he walked the speedy Billy Hamilton, who then stole second. Ryu then walked Todd Frazier, and Joey Votto followed with a two-run double. Phillips singled to drive in Votto for a 3-0 Reds lead.

By the end of the third inning, Ryu had thrown 63 pitches.

Reds starter Johnny Cueto matched his career high with 12 strikeouts in six innings in the 5-0 victory.

“Walking two hitters in the third inning was the worst part of my performance tonight,” Ryu said. “I don’t mind about the strike zone. If the umpire sets up the zone, pitchers should follow that zone.”

Of Ryu’s 104 pitches, only 9 percent were changeups, with curveballs and sliders each 19 percent.

The loss snapped the Dodgers’ three-game winning streak, which matched their season high.