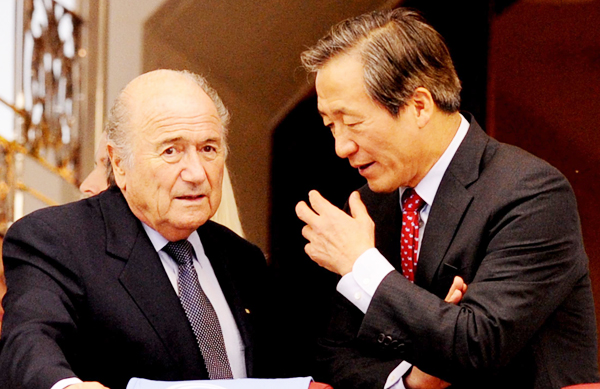 Since 1998, Joseph “Sepp” Blatter has run soccer’s governing body like an old-school dictatorship. One hopes, no matter how this year’s World Cup in Brazil goes, it will be his last as president of FIFA.

Blatter is using the World Cup to start his re-election bid for next year, when he will be 79. “I still have fire inside me,” he said today in Sao Paulo as he met with soccer officials from Asia, Africa and South America.

So what has Blatter done with that fire so far? For one, he has increased spending on personnel, management and the FIFA ruling bodies, to about 21 percent of all expenses in 2013 from about 17 percent in the years 1999 to 2002. That’s more than the 14 percent of revenue that FIFA spends on what it calls “development:” aid programs for national soccer associations, women’s soccer, charity and education projects. It’s as if FIFA were a country where the central bureaucracy absorbs more money than health, education and subsidies to poorer regions put together.

Blatter has been no visionary in sports terms. His tenure has yielded a few minor rule changes, notably one that penalizes players for pulling off their T-shirts after scoring a goal. Some changes were quickly reversed. In 2007, for example, FIFA banned games at stadiums more than 8,200 feet above sea level. It then raised the limit to 9,840 feet and was forced to grant an exception to Bolivia’s main stadium. By contrast, Blatter’s predecessor, Joao Havelange, boosted FIFA’s membership from 142 to 204 federations, and recast the rules in ways that made the game more dynamic and enjoyable to watch - and less rough.

Blatter has also done little to combat the corruption that flourished under Havelange, who was proved to have taken bribes and forced out as FIFA’s honorary president last year. Blatter has worked at FIFA since 1975, having joined the organization a year after Havelange’s election. Judging from a trove of documents recently published by London’s Sunday Times, which offer evidence supporting allegations of corruption surrounding Qatar’s bid to host the 2022 World Cup, he’s perhaps not the best man to dismantle the darker part of Havelange’s legacy.

At best, Blatter has succeeded as a cynical weather vane of a politician. In a 2010 interview, he said he was fully behind FIFA’s decision to play the 2022 World Cup in Qatar in June and July, the equivalent of playing on a frying pan in hell. Now, he claims the decision was a “mistake” (“One makes lots of mistakes in life”) and says he has recommended that the tournament be staged in the (slightly) cooler Qatari winter.

Blatter will consider it his legacy that, during his tenure, a World Cup was played in South Africa, and that Eastern Europe (Russia) and the Arab world (Qatar) also got their chances. Rulers who do not know how to say goodbye are usually good at symbolism. Blatter could have done much more for soccer federations in developing nations, giving them a bigger share of FIFA’s sponsorship and TV-rights revenue, and making sure they weren’t run by thieves.

The often greedy and unscrupulous soccer officials from poor countries are, however, Blatter’s political base. They will support his re-election next year if his campaign does not collapse under the weight of corruption investigations. Blatter says accusing them of unsavory practices is “racist,” a profoundly lame attempt to distract attention from the type of petty bribery that the Sunday Times documents reveal.

Not even kings rule until they die these days. The abdication of King Juan Carlos boosted respect for the monarchy in Spain. No matter how much “fire” he has left in him, Blatter, too, should go - if only to save FIFA’s reputation.

*The author is a Bloomberg View contributor. He is a Moscow-based writer, author of three novels and two nonfiction books.