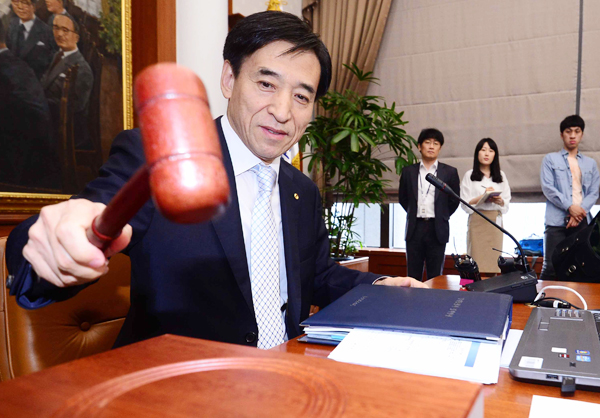 The Bank of Korea yesterday kept the key interest rate on hold for 13 consecutive months on the back of decelerating global and domestic economies and rising concerns over the appreciation of the Korean won against the U.S. dollar.

The central bank said that its monetary policy committee decided to hold the rate at 2.5 percent. The last time the key interest rate was changed was in May last year when the bank lowered the rate from 2.75 percent to 2.5 percent to support the central government’s move to stimulate the local economy.

While some analysts project that the bank may raise the interest rate as early as next month or in the third quarter, others believe that the rate will likely remained frozen throughout the year. If so, it would be the longest period that the interest rate has gone unchanged, after it was stagnant for 16 months between March 2009 and June 2010.

Previously, there was a growing consensus that central bank Governor Lee Ju-yeol, who took the post in April, would tighten monetary policy. Early last month, while attending the Asia Development Bank’s annual meeting in Kazakhstan, he said, “It would be difficult to say that lowering will be the direction that the interest rate would head to.”

The comment was interpreted as a heads up to the market that the central bank could raise the interest rate.

Yesterday’s decision was announced a day after the World Bank downgraded the global economic growth outlook from 3.2 percent projected in January to 2.8 percent.

Although the revised outlook is still higher than last year’s 2.4 percent, globally, many stock markets retreated after the news.

Other than the euro zone, which maintained the same growth outlook as last year at 1.1 percent, the outlook for many major economic blocs was lowered, including the United States, whose outlook was reduced by 0.7 percentage point, from 2.8 percent to 2.1 percent.

More concerning than the lowered outlook is stagnation in Korea’s domestic economy and the recent appreciation of the won.

The BOK governor acknowledged that the Sewol ferry tragedy that killed nearly 300 people in April has impacted the domestic market, particularly the service sector.

“Due to the influence of the Sewol tragedy, while exports continue to grow, the domestic economy has become hesitant [from moving upward],” Lee said during a briefing held after the monetary policy meeting. “I think at this point, we should look into the impact [of the Sewol tragedy] on the domestic market before making a conclusion on whether it would be a short-term or long-term factor that could affect the overall economy.

“The key point is, will the contracted sentiments on consumer spending and [corporate] investment be relieved [from the influence of the Sewol tragedy] in the near future? What I can say is that at this point, we are very closely monitoring the situation.”

He said that any changes that may be made to the 4 percent economic growth outlook forecast by the central bank earlier this year will be revealed next month.

“In the last two to three months, there have been changes in condition,” Lee said. “We’re looking into every aspect.”

Late last month the state-run think tank Korea Development Institute lowered its outlook for this year from 3.9 percent to 3.7 percent, citing changes in private consumption resulting from the Sewol tragedy.

The appreciation of the won has also been raising eyebrows lately. Since the start of the year, the currency has risen the most among 17 major foreign currencies. Compared to the end of last year, the won has strengthened nearly 3.8 percent against the U.S. dollar.

Though acknowledging that the won has appreciated drastically this year and that he believes herd behavior has played a role in the movement, he was cautious over the influence it might have on the economy at this stage.

“Rather than considering the won-dollar exchange figure [in our monetary policy decision], we’re putting more emphasis on the impact that the fluctuation may have on the economy,” Lee said.

“We believe that the won-dollar exchange should obviously be decided by the market, but a suddenly acute volatility has a negative impact,” the governor added. “But should the interest rate policy be used as a countermeasure?”

He said that foreign exchange value is decided through complicated factors other than the interest rate. It includes the economy’s fundamental international financial market situation and the inflows and outflows of foreign capital.

Despite negative factors such as the retreating economy and the rising value of the Korean won against the greenback, the central bank governor was sure that the current key interest rate was at the appropriate level to support the nation’s economic recovery.

But some analysts still say that the BOK will likely raise the rate as early as its next monetary policy committee meeting next month.

“The won has strengthened rapidly on the back of a strong current account surplus since April. This prompted the Bank of Korea and Ministry of Finance officials to voice concerns over the pace of the won’s recent appreciation, as the stronger domestic currency poses downside risks to Korea’s export outlook,” said Ronald Mann, an economist at HSBC. “But whether these risks materialize is contingent on the relative dollar price of Korean exports increasing.”

The economist said he doesn’t believe the recent appreciation of the won against the U.S. dollar will derail Korea’s “export-led recovery.”

“Rate hikes have been delivered by the central bank even when the won was at a stronger level against both the U.S. dollar and Japanese yen in 2005-2008,” Mann said.